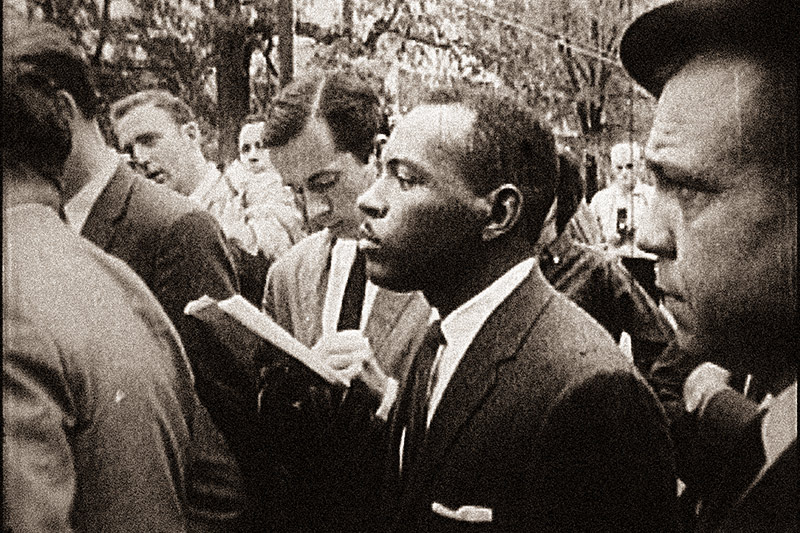 Wilson "Bill" Minor, writing in a notebook, reports on the integration of the University of Mississippi by James Meredith, center, in 1962. They are surrounded by U.S. marshals. (Photo from the Mississippi Department of Archives and History)

Wilson “Bill” Minor (A&S ’43), at 94 still a newspaper columnist, spent 31 years as a reporter at New Orleans’ The Times-Picayune, covering momentous events such as the Ole Miss riot of 1962. He vividly remembers the landmark events of the civil rights movement.

In 1961 an African-American man named James Meredith applied for admission to the University of Mississippi—Ole Miss. However, despite good grades and being a U.S. Air Force veteran, Meredith’s application was denied; the campus was still all white. Gov. Ross Barnett, a segregationist, supported the decision, even as Meredith filed suit for admission to the university.  The situation was ripe for confrontation,  and Minor knew he needed to be there to document this historical moment when President Kennedy deployed U.S. marshals to escort Meredith onto the campus.

“When Gov. Barnett defied a court order, there was bound to be trouble.  And indeed, when Southern segregationist civilians showed up to clash with federal marshals, the result was combustive,”  said Minor.

"When Southern segregationist civilians showed up to clash with federal marshals, the result was combustive.”

Minor’s front-line reporting told the world what transpired in Oxford, Mississippi, on Sept. 30, 1962.

“As much as I think my newspaper articles, which were syndicated at one point in 30 papers around the country, were informing the world of the civil rights movement, when the TV cameras broadcast this mêlée, I think it changed everyone’s consciousness about this very real issue in the South.”

The Ole Miss riot of 1962 left two civilians, including a French journalist, dead, and over 300 people injured, one-third of them U.S. marshals, who were sent to keep the peace.

Born in Hammond, Louisiana, Minor always knew he wanted to be a journalist. In 1947, the Times-Picayune sent him to Jackson, Mississippi, to be the paper’s bureau chief.

Today Bill Minor’s columns are still syndicated in six newspapers including the Jackson Clarion-Ledger. A new documentary, Eyes on Mississippi, chronicles his career.

He and James Meredith, who is almost 83, both live in Mississippi and get together occasionally. “James is a strange character, some even say crazy. Who else would try to break the color barrier in 1960s Mississippi? But he was a groundbreaker who could have easily found himself dead. It was a wild time to cover the news, but one I wouldn’t trade for anything.”

Flight for excellence
Simplifying climate change information
Homegrown
Digging up the past
The More You NOLA: Off the wall