Artist Shirin Neshat asked that the house lights be brought up so that she could see the packed audience in Dixon Hall on Friday (Jan. 30). She charmingly said, “I'm interested in having a conversation with you.” 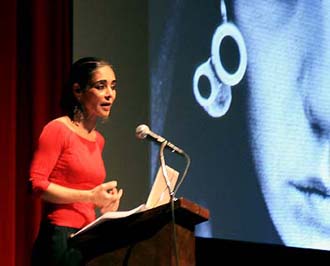 The Islamic Revolution haunts Iranian American artist Shirin Neshat, who is in exile from her native country. Her thought-provoking video installation is on display in the Newcomb Art Gallery. (Photos by Tricia Travis)

Neshat, director of the Women Without Men video installation currently on display at the Newcomb Art Gallery as part of the citywide art biennial Prospect1.New Orleans, is an Iranian American in exile from her native country.

“I love to test my potential with different audiences,” she said. “I love to see what happens if I expand beyond the gallery and museum and relate to the general audience. If my mother could understand what I do,” her voice trailed off.

Born in Iran in 1957, Neshat came to the United States to attend art school when she was 17. She has never returned to Iran for an extended period of time, and the fact of her banishment and the Islamic Revolution haunts her and her work.

Neshat presented a brief overview of her provocative work. From still photographs in the Women of Allah series (1993â“97) to art videos such as Turbulent (1998) and Fervor (2000) to the current Women Without Men, she has looked at Iran in multiple ways.

In the Women Without Men project, Neshat said she challenged herself to move into storytelling by adapting into video and film the surrealist novel of the same name by the Iranian woman writer Shahrnush Parsipur. Neshat simultaneously developed the video art installation and a color, feature-length film for distribution in movie theaters. 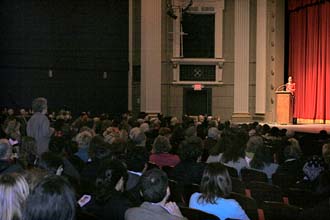 A member of the Dixon Hall audience asks a question of Neshat, who had the house lights brought up to put her more in touch with those who came to hear her speak.

The project started in 2003, and while the video component is complete, the film is not quite finished. Neshat presented clips from the film, describing what it was like to recreate Iran in 1953  the setting for the film  in Morocco in 2007 with an international team of filmmakers.

Neshat said that she and other international artists are devising a new language. “Our language is a new language that is basically a hybrid, global language. I'm really speaking to you and about you.”

In her work, she said, “There is a sense of universality that reveals itself from an ethnically specific direction.”

While she strives to make her art universal, it is also deeply personal. “The reason for my art work,” she said, “is to face my own personal anxiety as a human being, my own fears and worries.”

She lives a nomadic lifestyle, she said, living everywhere and nowhere.

“All of us,” she said, “know that an artist is always in a conversation with their inner world versus the outer world.”

The Women Without Men video installation will be exhibited at the Newcomb Art Gallery until Friday (Feb. 6).