Two players from Louisiana and one from Georgia have signed National Letters of Intent to become part of the Tulane women's basketball team for 2009â“10 under head coach Lisa Stockton. 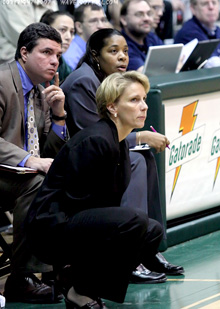 Snow is a 5-feet-8-inch true point guard who led her high school team to two 5A state championships in the last three seasons, bookended around a state runner-up finish in 2007. An all-district selection, she dished out 158 assists last season.

Snow and Graystone already have a previous history together on the court. In the Louisiana 5A State Championship game, Graystone attempted a game-winning drive for Chapelle in the waning seconds, but Snow stepped in and drew a charge, sealing the win for Southwood.

Grayson, 5 feet 8 inches tall, was the Louisiana High School 5A Most Valuable Player last season. The all-district, all-metro and all-state selection led Chapelle to the state championship game and carries a career scoring average of 16.2 points per game to go with 8.3 rebounds and 4.2 assists per contest.

“Olivia is one of the best guards in the state. She is someone we've been watching for years, so it's quite rewarding to receive her commitment,” Stockton said.

Grayson also has a history with Tulane, as her half brother, Andrew Niermann, is the starting right guard on the Green Wave football team.

“It's great to get players out of Louisiana, especially one of this caliber,” Stockton added. “Our incoming class is full of winners. They have been highly competitive in high school and had great success. They are the type of student-athlete we are looking for at Tulane: skilled on the court, smart both on the court and in the classroom, and bringing a strong work ethic and winning attitude to our program.”

McDonald will fill a position coveted by the Green Wave: a true power forward. At 6 feet 1 inch tall, she was one of the top rebounders in the state of Georgia. The Gwinnett Daily Post named the senior to its preseason Super Six, as she led her high school to the state tournament, ending a 30-year drought for the school.

The two-time, all-county player also excelled off the court as a two-year all-academic team honoree.

“Brittany's a player we need: She can step out and hit the outside shot, really runs the floor well and is an excellent rebounder,” Stockton said.

The players will join Danielle Nunn, a transfer from Texas Christian University sitting out this season due to NCAA rules, as newcomers for next season. Nunn will be a junior with two years of eligibility remaining. The Green Wave are slated to lose three players to graduation at the end of the current season: forward Kendra Barnes, guard Ashley Langford, and guard/forward Megan Valicevic.