The Tulane women's tennis team has waited for this chance for months  to play a match on the Green Wave's home court for the first time since the sport was suspended in 2005 after Hurricane Katrina. On Sunday (Jan. 18), in a double treat for Tulane fans, the tennis team makes its home debut, followed by a nationally televised game for the women's basketball team in Avron B. Fogelman Arena in the Devlin Fieldhouse. 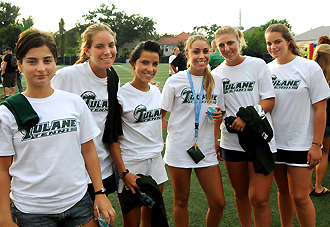 The members of the Tulane women's tennis team are, from left, Mariam Kurdadze, Ali Pirro, Marcela Fonseca, Caroline Gerber, Sharon Siegel and Liz Hamlin. They all are first-year students. (Photo by Sally Asher)

It's all happening on the uptown campus, where the tennis team takes on North Texas State University at 11 a.m. at the Goldring Tennis Complex, and the women's basketball team plays the University of Texasâ“El Paso at 1 p.m. in nearby Avron B. Fogelman Arena in the Devlin Fieldhouse.

The tennis match is free of charge and free hot dogs will be available while supplies last.

Across campus in Avron B. Fogelman Arena in the Devlin Fieldhouse, where ESPN2 will televise the basketball game, tickets will be $1 “to any fan who shows Green Wave spirit,” according to the athletics department, which hopes to “pack the house” for the game. Fans are encouraged to wear Tulane gear, paint their faces and bring signs to display their Green Wave pride.

“This is a great opportunity for the Tulane community to showcase their support to a national television audience,” says Lisa Stockton, head coach for women's basketball. “Moments like these  as well as hosting a conference tournament, as we are in March  are times we can show what an exciting and fun environment we have in Fogelman Arena. We're hoping for a great crowd Sunday.”

Meanwhile, Terri Sisk, head coach of the women's tennis team, says her team will be ready to play in its home debut. 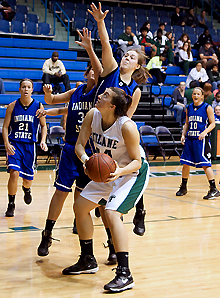 Brett Benzio, freshman center for the Green Wave, eyes the basket to score in Avron B. Fogelman Arena in the Devlin Fieldhouse. (Photo by Dave Browning)

The Green Wave, which won three-straight C-USA championships before its three-year hiatus, is back with a top-25 recruiting class.

“We would love to have everyone come out and support your young Green Wave team,” Sisk says. “It will truly be a big day for the Tulane women's tennis program. We know this community loves tennis, and as we take the next step towards restoring this program to the championship level we had before, we'd love to have that community behind us.”

A pre-match ceremony before the tennis match will commemorate the first home match of a reinstated sport since 2005.

Sisk joined the Green Wave after serving the last five seasons as the head coach of the women's tennis team at Samford University in Birmingham, Ala.

She inherits a program that won four C-USA titles during 2001â“05 and advanced to the NCAA Tournament six times in 1997â“2005 before being suspended in the aftermath of Katrina.

When Sisk accepted the Tulane coaching job, she said, “Tulane is known across the nation for its incredibly strong academics and athletics, especially their women's tennis program. I look forward to the rebuilding of one of America's premier programs not only for the university but for the resilient people who live in the New Orleans area.”