It's a mystery that is likely to go unsolved. How did a century-old, valuable painting by a Newcomb art master end up in an international charity's online auction?

Sally Main doesn't know where the painting has been over the years, but the senior curator of the Newcomb Art Gallery is thrilled that the artwork has come to rest on the uptown campus where its artist, Ellsworth Woodward, and his brother, William Woodward, founded the Newcomb art program in the late-19th century. 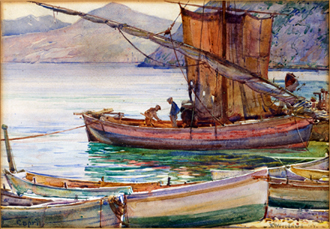 Executed in watercolor by Ellsworth Woodward in 1907, The Felucca, Capri depicting boats on the Bay of Naples retains brilliant colors. The painting now resides in the Newcomb Art Gallery's collections. (Photo by Owen Murphy)

The mystery began earlier this year when a sharp-eyed alumnus saw the painting on an Internet auction operated by the nonprofit Goodwill Industries International. The alumnus called the Tulane president's office, and the message found its way to the art gallery.

After confirming the painting's authenticity and entering the bidding war, Main and gallery director Charles Lovell eventually procured the piece with an offer of $7,500. They hope to debut the new acquisition this fall.

"It's in beautiful condition," Main says, describing the scene of boats on the Bay of Naples with colors "as vibrant and gemlike as it was the first day he painted it" with blue-greens, purples and oranges in the Capri landscape. "Ellsworth had a second sense about watercolors that is phenomenal." The painting carries Woodward's signature.

To add to the mystery, on the back of the painting is a handwritten letter from Ellsworth Woodward to the original purchaser of the work, but the name of the purchaser has been removed. The correspondence mentions the artist's fondness for the painting, which was exhibited in the 1915 Panama-Pacific International Exposition in San Francisco.

The correspondence verifies the painting "was absolutely in New Orleans," Main asserts. It has come home to rest and to help sustain Newcomb's artistic legacy.