Writing: An Exercise in Urgency

For novelist Claire Messud, on campus this week as the 24th Zale Writer-in-Residence, writing is often an exercise in urgency. 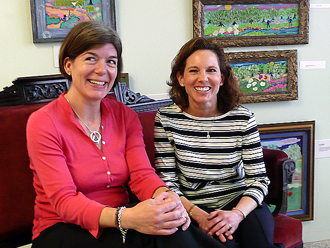 Claire Messud, left, is giving talks and meeting with students this week during her tenure as the 24th Zale Writer-in-Residence. At right is alumna Dana Zale Gerard, who helped found the program. (Photo by Crystal Kile)

“You don't always know why you write about what you write, but there's an urgency,” she says, discussing the settings for her books, which take place internationally in cities she has never lived in.

Messud, author of three novels and a book of two novellas, also writes book reviews and articles for a number of publications in the United States and in Europe.

Despite the benefit that Messud says she derives from writing book reviews and her interest in journalism (she was able to follow candidate Barack Obama for a week on the campaign trail at the end of last summer), she made a point to distinguish this type of writing from her “work”  that is, fiction, her true passion.

Although her two children and “other writing” often pull her away for weeks at a time, Messud says she is working on a novel.

Nancy Mock, interim director of the Newcomb College Center for Research on Women, which coordinates the residency, says that although Messud would have been a fine choice for any year, the decision to invite her this year was deliberate.

The programming theme for the center this year is “Gender and Disaster,” and Messud's most recent book, The Emperor's Children, is set in New York City during 2001.

Creative writing senior Phillip Matthews, who introduced Messud at the reading she gave on Monday (March 9) in the Lavin-Bernick Center, says, “I was really impressed with how delicately [Messud] handled 9/11. It just kind of snuck in, and there it was.”

Messud feels that hearing or reading individuals' stories about disasters and historical events can lead to enhanced comprehension of the events.

The Zale Writer-in-Residence program was started by Dana Zale Gerard, a 1985 alumna, while she was a sophomore in Newcomb College. Gerard felt that the structure of many campus visits by distinguished professionals and scholars didn't allow students to foster the meaningful connections that this residency promotes.

“We want students to see that they're just regular people who have been successful,” Gerard says.

Claire Messud will appear on Thursday (March 12) at 6 p.m. for an interview with Paula Morris, assistant professor of English, in the Freeman Auditorium in the Woldenberg Art Center. Morris says the interview will focus on Messud's writing process and career. Messud also will give a talk at 1 p.m. on Friday (March 13) at the Newcomb College Institute.

The events are free and open to the public. For more information about the events or the Zale Writer-in-Residence program, call 504-865-5238 or nccrow@tulane.edu.