A transplanted Kiwi is contributing to the literary landscape of the Crescent City. Paula Morris, a native of New Zealand, is garnering accolades for her books while she encourages her Tulane creative writing students to write themselves and also to learn how to organize and promote literary events. 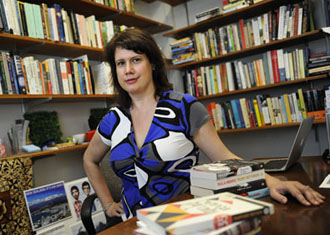 English assistant professor Paula Morris has written award-winning books and is teaching a new generation of writers to write creatively and to market literary events. (Photo by Cheryl Gerber)

“This is a great time for our students to be in New Orleans,” says Morris, assistant professor of English. She points to the literary opportunities created by the Creative Writing Fund, a gift from an anonymous donor to the Tulane Department of English.

The Creative Writing Fund supports several activities, from sending students to conferences and seminars to giving prizes such as a weeklong residency at Studio in the Woods.

The Creative Writing Fund also sponsors literary events that are free and open to the community. This spring, the Poet Laureate Series presented poet Billy Collins. And National Book Awardâ“winner Joan Didion will appear on April 6 in McAlister Auditorium at 7 p.m., sponsored by the Creative Writing Fund's Great Writers Series.

Students in Morris' “Literary Event Management” course this semester have publicized both the Poet Laureate and Great Writer series, acquiring skills in events promotion in the process.

Morris is excited about marketing New Orleans as a hub of literary activity and building on the legacy of local writers such as Walker Percy, William Faulkner, Tennessee Williams, John Kennedy Toole, Kate Chopin and Anne Rice.

“We talk about writing about New Orleans in my classes all the time,” Morris says. “I think it's difficult to write about New Orleans in a way that doesn't revel in its eccentricities and without using clichÃ©s  it's easy to resort to street cars, oak trees dripping with Spanish moss, and so forth.”

Morris's first collection of short stories, Forbidden Cities, landed on the short list of nominations for the Commonwealth Writers' Prize for Best Book Award: South East Asia and the South Pacific. Morris is the only New Zealander along with five prominent Australians on the list.

Scholastic Books will publish Morris' first young adult novel in September. Ruined is a mystery/ghost story set in the Garden District and Treme neighborhoods of New Orleans, three years after Hurricane Katrina. Much of the action takes place in Lafayette Cemetery. Representatives from Scholastic Books plan to come to New Orleans in early April to produce a short promotional video for the novel. They'll interview Morris and shoot footage in locations relevant to the novel.

Morris also used New Orleans as a setting for the first of her three published novels, Queen of Beauty.

This year has been a busy one for Morris. She edited an anthology, The Penguin Book of Contemporary New Zealand Short Stories, and she also served as guest editor of an issue of the New Zealand literary journal Landfall.

Morris's next book project focuses on some of her ancestors, Maori (native) chiefs, who traveled from New Zealand to England to meet with Queen Victoria and got stuck there in a snowstorm. Using her forebears' oral histories as a springboard, Morris conducted research for the project in Birmingham, England, during spring break. She writes about her experiences on her blog.