The 30th-ranked Tulane women's golf team, which bested 13 other schools in a Mississippi tournament on Sunday (April 5), is heading into the Conference USA tournament as the league's highest-ranked squad. A storybook season continues for head coach John Thomas Horton's team, back in play after a three-year hiatus following Hurricane Katrina. 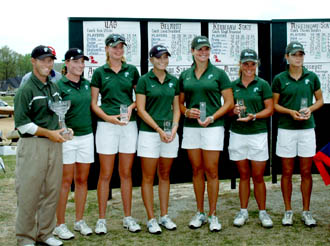 The Green Wave team combined for a 6-over par 294 total in the final round of the Ole Miss Rebel Intercollegiate tournament, edging the University of Mississippi by 12 strokes at the Country Club of Oxford in Oxford, Miss.

Tulane sophomore Linn Gustafsson tied for individual honors in the tournament. Her 54-hole total (75-73-69) is tied for the ninth-best effort in school history.

“I am unbelievably proud of our team,” Horton said. “Today is another great day for the Tulane golf program.”

Tulane's duo of first-year players, Daniela Holmqvist and Samantha Troyanovich, joined Gustafsson among the top-10 finishers. Holmqvist, who completed the Intercollegiate in a tie for third place, was honored as the C-USA Women's Golfer of the Week for March 11-17.

Tulane will have little time to celebrate the victory as the team sets its sights on capturing the 2009 C-USA Tournament championship that opens on Sunday (April 12) at the Tulsa Country Club in Tulsa, Okla. The Green Wave will enter the event as the highest-ranked squad in C-USA. The conference tournament winner receives an automatic place in postseason NCAA competition.

The Tulane women's team returned to the links for the first time since Hurricane Katrina in September of last year, debuting under Horton, its first-year head coach.

The program was one of eight varsity sports that were suspended by the university in the aftermath of Hurricane Katrina in the fall of 2005. Previously, the Green Wave had made five NCAA Regional appearances since 2000, including a 15th-place finish in the NCAA Tournament in 2005, and had won back-to-back Conference USA titles.

During the three-year interlude, Horton was hired in July 2007 and entered the season with a pair of sophomore transfers and four true first-year players.