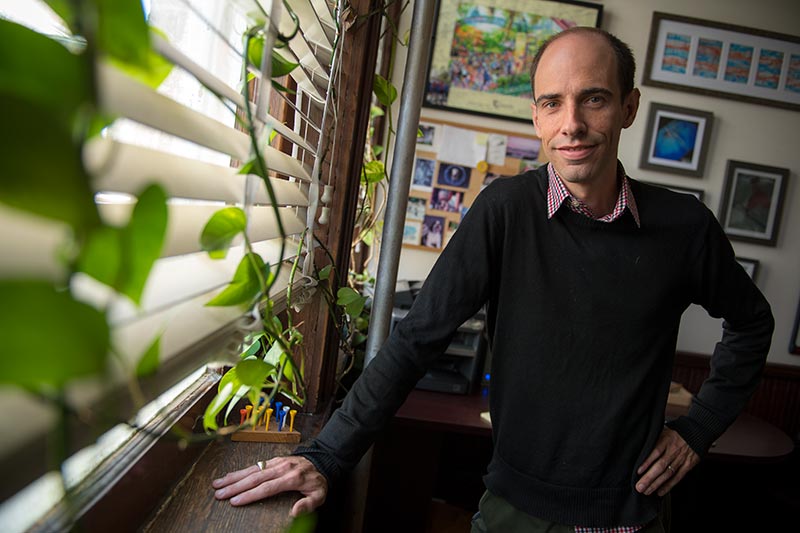 Kyle Straub, associate professor in the Tulane Department of Earth and Environmental Sciences, recently worked with ExxonMobil in Houston to model the ocean floor. (Photo by Paula Burch-Celentano)

For Tulane professor Kyle Straub, a recent sabbatical meant an opportunity to explore one of the most intriguing places on earth.

Last year, Straub, associate professor in the Department of Earth and Environmental Sciences, was invited by colleagues at ExxonMobil to join a research group at their new Woodlands campus in Houston, a facility that approximately 14,000 geologists, engineers, and investment traders call home.

Despite the placid nature of its surface, the ocean’s floor undergoes regular upheaval and change, due to powerful flows of both water and sediment altering its shape. The Exxon Mobil group is particularly interested in how the powerful flows transported and deposited coarse sand into the deep ocean.  These deposits of coarse sand through time have been buried to great depths and are now the reservoirs that oil companies are searching for to produce hydrocarbons.

“What piqued my interest was an offer to work with high resolution, shallow seismic surveys and to publish on my interpretations."

“What piqued my interest,” Straub says, “was an offer to work with high resolution, shallow seismic surveys and to publish on my interpretations. These seismic surveys were from a diverse range of geological settings, including mini-basins in the Gulf of Mexico, offshore Corsica, and offshore Zaire.”

“The work,” he adds, “allowed me the opportunity to dust off seismic interpretation skills that have largely lain dormant since my PhD years.”

While in Houston, Straub was able to interpret much of the empirical data the Woodlands unit received, but that the work is still ongoing, and that publications about these models are forthcoming. True to form, in such an interdisciplinary research environment, new questions have continued to arise. Even so, he says, it’s good to be home.

“I miss the daily interactions with such a strong research group,” Straub says, “but it’s great to be back in New Orleans, riding my bike to the university each day.”