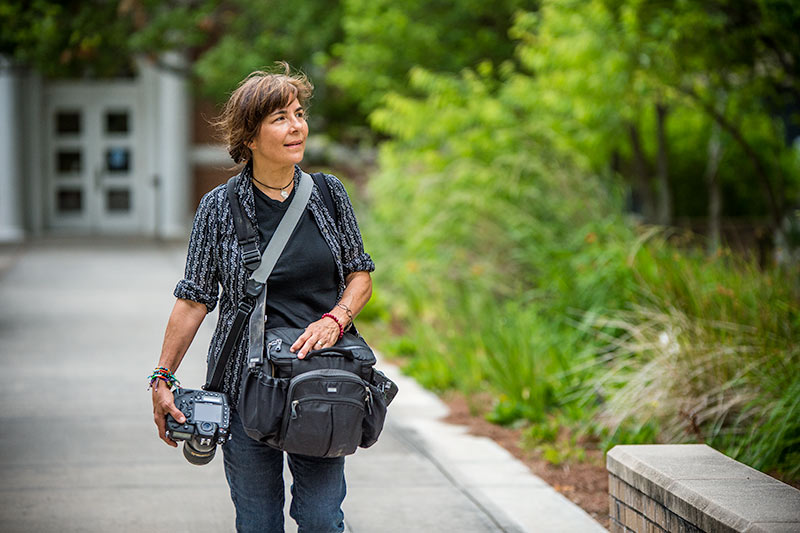 Senior university photographer Paula Burch-Celentano will view the Tulane Unified Commencement Ceremony from a different perspective this year — as a graduate. (Photo by Ryan Rivet)

Paula Burch-Celentano has photographed the faces and places of Tulane University since 1999. During the 2017 Unified Commencement Ceremony, Burch-Celentano will step from behind the camera for a day to receive a master’s degree from the Tulane School of Social Work.

“While shooting, I’ve always noticed the older female graduates and thought, ‘If they can get out of their comfort zones, I can do the same,’” said Burch-Celentano, who ironically prefers to avoid having her photo taken.

“While shooting, I’ve always noticed the older female graduates and thought, ‘If they can get out of their comfort zones, I can do the same.’”

For the past two years, in addition to her full-time job as senior university photographer, Burch-Celentano attended classes, completed projects and worked an internship on weekends with the goal of accomplishing a task that was both out of her comfort zone and far from easy. The biggest leap, however, was leaving her family behind to study abroad in northern India, a trip she documented with a series of photographs and a short essay.

In addition to her son, Wyatt, 15, and husband, Donald, serving as her inspiration to follow through, Burch-Celentano said she was inspired by alumna Jane Wolfe—the subject of a photo she shot for a 2012 graduate profile. Wolfe, a then 47-year-old grandmother of two was featured in New Wave for earning degrees in religious studies and history.

After her degree is conferred on May 20, Burch-Celentano said she plans to continue working as a Tulane photographer. Ultimately she hopes to use photography as a tool to create awareness of social issues.