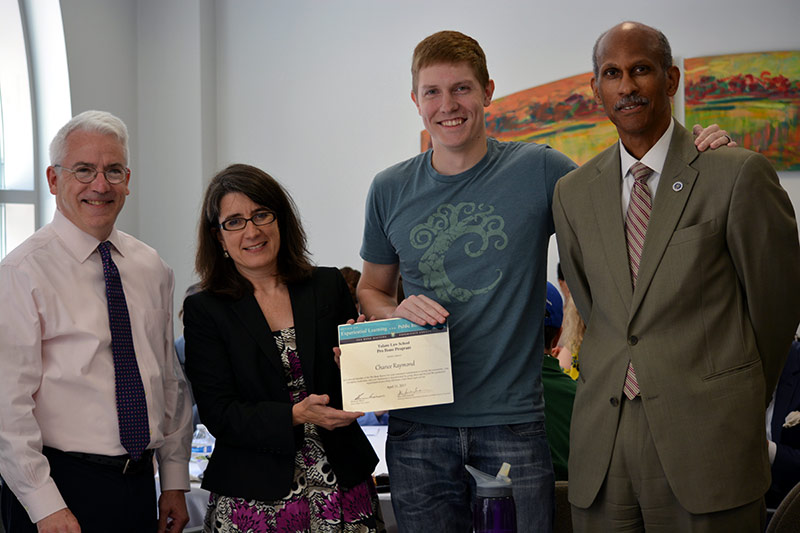 Members of Tulane University Law School’s 2017 graduating class have performed 18,134 hours of pro bono work during their three years of law school. That’s an average of 104 hours per student and far more than what’s required.

The law class of 2017 is the last with a 30-hour pro bono minimum. Starting with the Class of 2018, students must donate at least 50 pro bono hours — and already almost a quarter of that class has exceeded 100 hours.

Top pro bono performers were honored at an April 21 luncheon, and Class of 2017 members who topped 90 hours were inducted into Tulane Law’s “Pro Bono Krewe,” a riff on New Orleans’ signature parading groups.

“Learning while in the service of others is a cornerstone of Tulane Law."

While many Class of 2017 members put in hundreds of pro bono hours, three led the way with consistent, dedicated service through a variety of public interest partners:

— Ana Perez-Funez performed 764 hours, primarily for the Office of the Federal Public Defender and the immigration law clinic at Loyola University New Orleans College of Law.

The students follow Tulane Law School’s long tradition on leadership in public service. The school, which in 1987 became the first U.S. law school to require pro bono service for graduation, has even generated a question/answer on the game show “Jeopardy!”

“Learning while in the service of others is a cornerstone” of Tulane Law School, said Tonya Jupiter (L ’94), assistant director of the pro bono program. The Office of Experiential Learning and Public Interest Programs tries to fuse a student’s interests with meaningful legal service in the community through a variety of public interest partners, she said. With their service far beyond the minimum, she said, the students celebrated at the annual pro bono luncheon “are the embodiment of why pro bono matters and experience counts.”

Like this article? Keep reading: President’s Teaching Awards go to professors of law and math