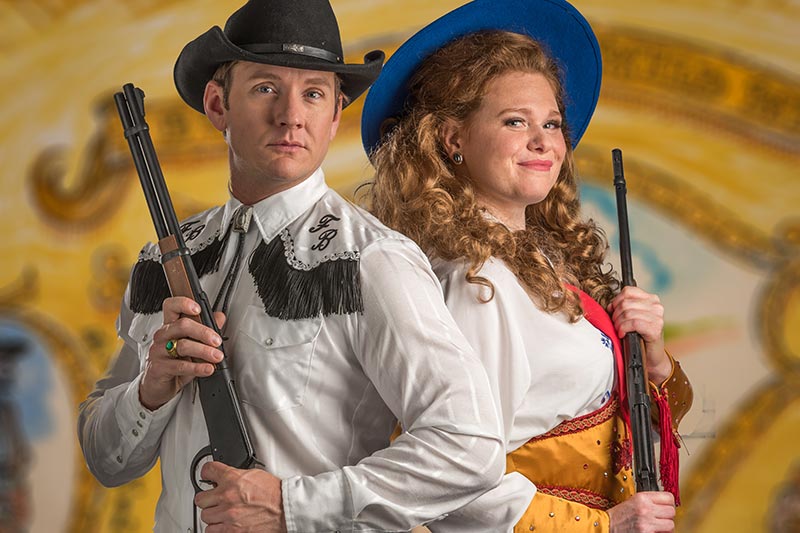 Jason Dowies, left, and Katie Howe co-star in Summer Lyric Theatre's 'Annie Get Your Gun' opening Thursday, June 22. The performance marks the start of the 50th season and is the first show that the company ever produced. (Photo by Michael Polumbo)

Celebrating the company’s golden anniversary by revisiting its roots, Summer Lyric Theatre will open its 50th season with a powerhouse performance of Annie Get Your Gun. The show will premiere on Thursday, June 22, at 8 p.m. in Dixon Hall.

Transporting audiences to Buffalo Bill’s Wild West show, the musical centers on sharpshooter Annie Oakley, played by 2009 Tulane graduate and New York-based actress Katie Howe. Howe is a veteran of Summer Lyric Theatre and will once again team up with director and choreographer Diane Lala, who previously choreographed her 2014 performance as Sally Bowles in Cabaret.

“It is truly a classic American musical, and that’s what we’ve made our name on.”

Considered to be songwriter Irving Berlin’s masterpiece, the play features timeless show tunes, such as “There’s No Business Like Show Business” and “Anything You Can Do.”

“I like to incorporate themes during seasons so the shows have something in common. This season is ‘A Tribute to the Ladies of the Great White Way,’ so the whole season features shows with strong leading female characters,” said McKelvey, noting that Summer Lyric audiences can also look forward to productions of Hairspray in July and Gypsy in August.