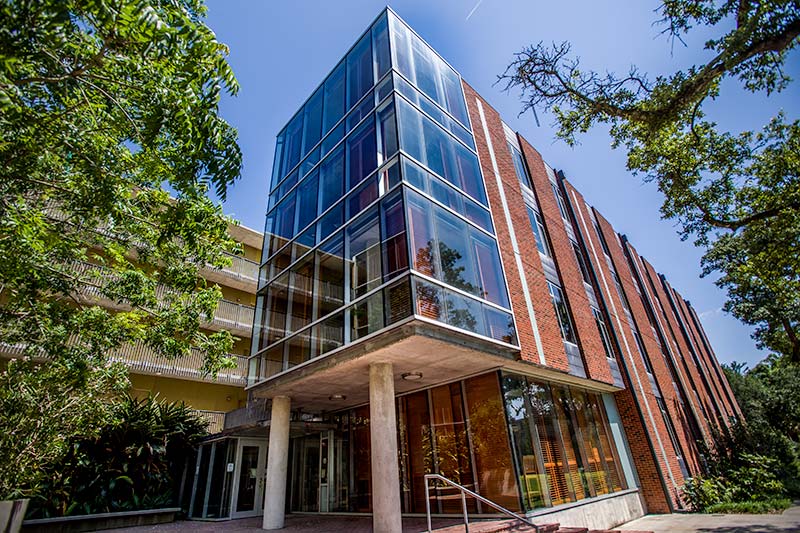 First-year Tulane student John Alexander won the Office of Sustainability’s student-proposed sustainability contest with his idea to install motion-sensor lights in residential halls. Wall Residential College, pictured, on the uptown campus was one of two halls to get the first set of installations. (Photo by Ryan Rivet)

The Tulane University Office of Sustainability is testing the idea that one small change can help reduce the campus-wide carbon footprint.  The small change in this case was the winning proposal for the Tulane Unplugged Fund in which students submitted their ideas for reducing the campus’ environmental impact.

The winner, first-year Tulane student John Alexander, saw his idea put into action this spring with the installation of motion-activated light switches in the recycling rooms of Willow and Wall residence halls. His recommendation was to place the sensors in rooms with minimal use where lights are typically left on.

“Even with the up-front cost of implementation, motion-activated lights save a significant amount of money in energy costs in the long run,” said Alexander, who is also director of the university’s student government sustainability committee.

“This contest pushed me to think about how campus energy use plays into sustainability and creating a greener campus.”

The Office of Sustainability regularly monitors the contributions of energy usage to Tulane’s carbon footprint. Its 2016 greenhouse gas inventory found that more than half of Tulane’s greenhouse gas emission comes from electricity usage, which increases to 65 percent with the addition of natural gas.

“For students hoping to make an environmental impact on campus, energy is the key aspect of sustainability to think about,” said Liz Pfafflin, assistant director in the Office of Sustainability.