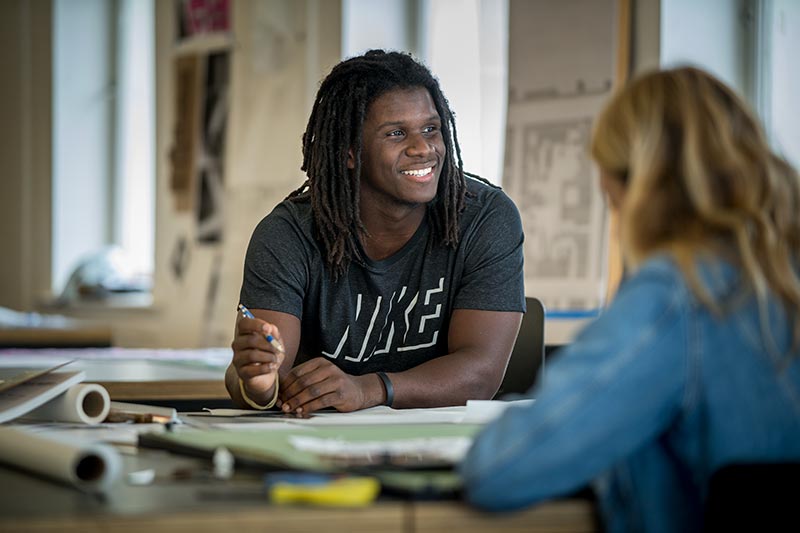 Ken Schwartz knows the power of potential. The Michael Sacks Chair and Dean of the Tulane School of Architecture was reading The Advocate last month when a feature caught his eye — a profile on painter and recent Louisiana State University graduate Brandon Surtain. The story featured several of Surtain’s vibrant works depicting his childhood in New Orleans. Recognizing Surtain’s talent, Schwartz contacted him through the article’s author to discuss an extraordinary opportunity: the chance to study architecture at Tulane.

Before Schwartz contacted him, Surtain was planning to work as a full-time artist for a year. A former defensive back on the Tigers football team, Surtain earned a bachelor’s degree in fine art in May.

“His paintings are architectural,” said Schwartz. “I read the article and saw that Brandon was clearly interested in studying fine art at the graduate level. I said, ‘Well, why don’t you think about architecture first?’ ”

“I’ve always been interested in contributing to the communities that are represented in my paintings.”

— Brandon Surtain, student in the graduate program at the Tulane University School of Architecture

Surtain and his family had been living in Baton Rouge, Louisiana, since Hurricane Katrina. “I always planned on coming back but to have this opportunity to come back sooner than I planned is a blessing. I honestly couldn’t be happier,” he said.

He is currently taking introductory architecture classes and collaborating with fellow students within a design studio, which Schwartz notes is “the center of every architectural education.”

While delving into his studies, Surtain also looks forward to taking part in service opportunities hosted by the school, which has completed about 100 building projects for the local community since 2006 through the Albert and Tina Small Center for Collaborative Design.

“I’ve always been interested in contributing to the communities that are represented in my paintings,” said Surtain.

Brandon Surtain’s paintings, like 'Game of 21,' reflect his childhood in New Orleans.