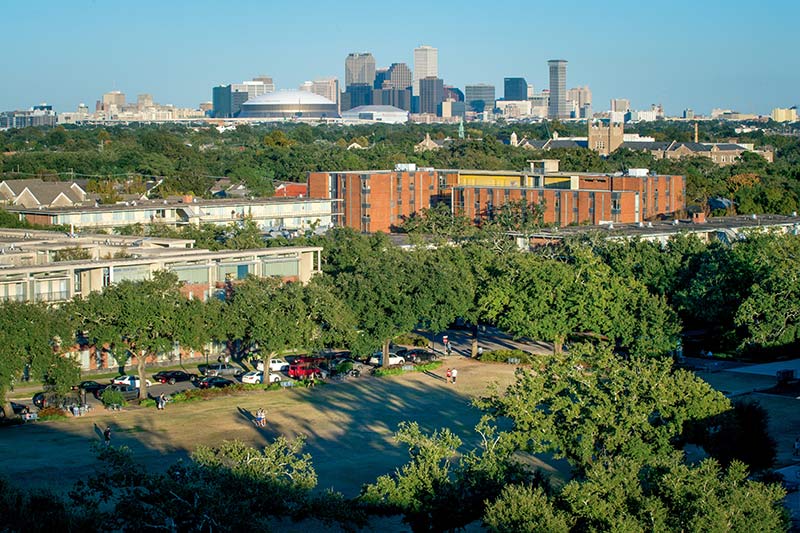 The upper floors of many buildings on the uptown campus provide a stunning view of the New Orleans skyline. (Photo by Paula Burch-Celentano)

As New Orleans prepares to commemorate its 300th anniversary in 2018, Tulane University is celebrating its relationship with the city and gearing up for the next 300 years of partnership to come.

Established as a medical college in 1834, Tulane has remained a part of the fabric of New Orleans for more than half of the city’s existence.

Richard Matasar, senior vice president for strategic initiatives and institutional effectiveness, said the university and the city are both inherently linked.

“There is no Tulane without New Orleans and there’s a very different New Orleans without Tulane,” said Matasar. “Tulane has played a significant role in the city’s evolution through educating its citizens, graduating its many leaders and contributing to its culture.”

Looking back 180 years, Matasar recalled how Tulane doctors were at the forefront of battles against tropical illnesses plaguing the city. Today, the university remains on the front line against recent outbreaks such as the Zika and Ebola viruses.

Also exciting, he said, is anticipating how new contributions by Tulane researchers and scholars help ensure the city’s prosperity and success in the future. “Our scholarship puts us in a position to improve the human condition,” said Matasar. “Through exploration of environmental sustainability, diversity and inclusion, gulf regional industries like oil and gas, and better understanding of the arts, music, and food of our region, we can continue to make a real impact for the next 300 years.”

Tulane launched a New Orleans Tricentennial website this week with details of upcoming lectures and events that will be hosted by Tulane beginning in January 2018. The university is also partnering with local newspapers, The New Orleans Advocate and The Times-Picayune, to provide faculty experts for articles and discussions on topics pertaining to the tricentennial as well as highlighting Tulane’s many accomplishments.