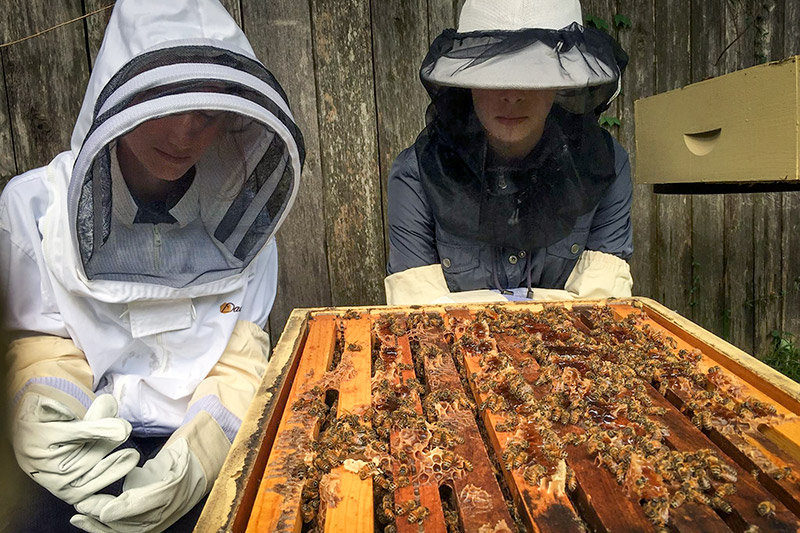 Tulane’s uptown campus isn’t the only thing buzzing this time of year. A group of Tulane undergraduate students recently spent the day with 60,000 bees from their very own beehives, which resulted in a harvest of nearly 50 jars of honey.

Those bee lovers are members of the Tulane Beekeeping Club, which since 2015 has maintained a beehive off-campus. This fall marks the first time the group has been able to harvest honey from the bees.

Before their September harvest, the group stopped at the home of Elizabeth Glecker, a fellow beekeeper and clinical associate professor in the Tulane School of Public Health and Tropical Medicine. Glecker, who has her own beehive on the West Bank, loaned the students protective gear and other bee-handling equipment.

“There’s a good beekeeping community in New Orleans and even within Tulane.”

“There’s a good beekeeping community in New Orleans and even within Tulane,” said Darcy Gray, president of the Tulane Beekeeping Club.

Tulane alumna Annie Tete has been hosting the club’s beehive at her uptown home since March. The hive was previously hosted by Thomas Luongo, an associate professor in the Tulane School of Liberal Arts.

With netted hats, thick jackets, and the help of a “smoker” and a “bee brush,” the students and Tete began removing several honeycombs from the hive in her backyard. Kneeling over buckets in the kitchen, they bottled 48 jars of filtered honey, with plans to sell some to students on campus.

“Looking to the future, I think it would be great for the club to keep partnering with local beekeepers and visiting local hives in the city,” said Gray. “It is really cool to see the way that urban beekeeping is so available.”