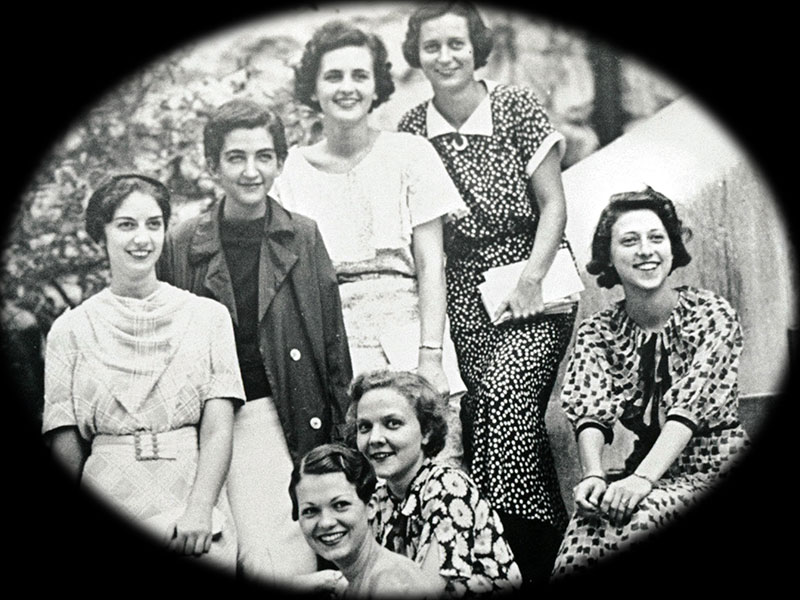 On the steps of Gibson Hall, Lindy Boggs (sitting, far right) joins her Newcomb College classmates in the 1930s. Boggs went on to distinguished career, serving in the U.S. Congress and later as ambassador to the Vatican. Boggs’ photo is included in an online exhibit, “Excellence in Education” in the Tulane University Digital Library. She represents achievement in the field of administration. (Photo from Tulane University Archives.)

Just in time for Homecoming this weekend, a new digital exhibit celebrating the achievements of Tulane University women has been posted online.

The exhibit, “Excellence in Education: Celebrating the Artistic, Academic, Athletic and Administrative Achievements of the Women of Tulane University” will be hosted in the Tulane University Digital Repository under Online Exhibits and will be up permanently.

The exhibit is organized by fields of achievement—artistic, academic, athletic and administrative—and is designed to change and expand, said Ann Case, university archivist and curator of the exhibit.

The achievements of the women featured in the exhibit “span a century of excellence of education at Tulane.”

The achievements of the women featured in the exhibit “span a century of excellence of education at Tulane,” said Case.

In the initial exhibit, photos and biographical vignettes of five to seven women in each of the four achievement fields are included.

Tulane University Archives partnered with Nola4Women, a nonprofit organization whose mission is to improve the lives of women and girls while celebrating the tricentennial of New Orleans, to develop the exhibit.