Tulane Hillel director named one of 50 most influential American Jews 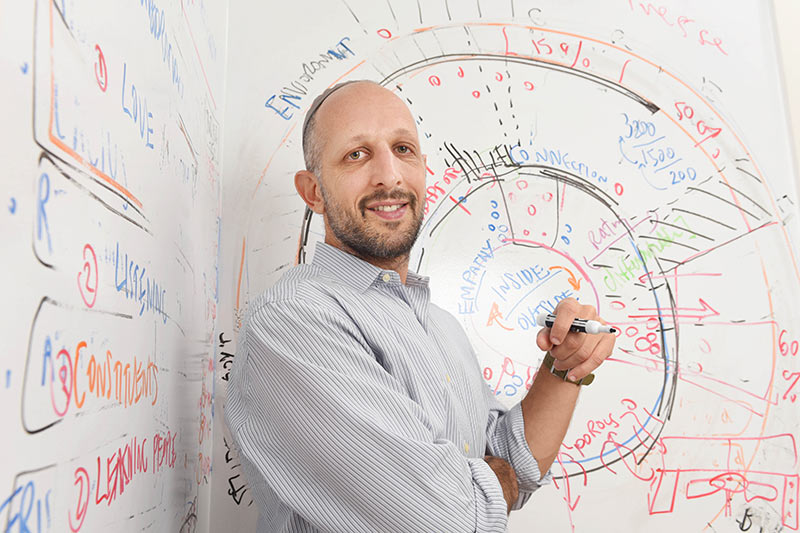 Rabbi Yonah Schiller, executive director of Tulane Hillel, uses his white board when talking about Hillel as a case study in social innovation and social entrepreneurship in September 2015. (Photo by Cheryl Gerber)

Rabbi Yonah Schiller, executive director of Tulane Hillel, has been named one of 50 of the most influential, accomplished and interesting American Jews by the Forward, one of the nation’s leading Jewish publications.

The Forward released its annual Forward 50  list at midnight Nov. 2, calling Schiller a leader who has “revolutionized Jewish outreach using a new model that is being examined and replicated across the nation.”

Schiller, 46, is cited for his efforts to reach more than 90 percent of Tulane’s Jewish population, as well as 30 percent of the total student body. He accomplished this by dissolving the existing student leadership board and giving leadership roles to more than 300 students and providing small grants for original student programming, including Shabbat dinners, urban farming and a Nice Jewish Boy Pageant.

"Thanks to Executive Director Rabbi Yonah Schiller, Tulane Hillel is one of a kind."

Editors of the Forward

“Now Tulane Hillel’s budget has more than doubled, Jewish student enrollment has reached nearly 3,000 and Hillel at schools like Princeton University and the University of Vermont are looking to replicate Schiller’s successes,” the Forward writes.

Schiller has served as executive director of Tulane Hillel since 2008. In addition, he is special projects consultant in the Social Innovation Social Entrepreneurship program at Tulane's Phyllis M Taylor Center for Social Innovation and Design Thinking. He is also founder of the Jewish Design Initiative (JDI), a national design incubator geared towards building scalable systems, models and projects for creating inclusive and high impact Jewish community. In 2013, he received the Mortar Board Excellence in Teaching Award for the most outstanding non-tenured professor at Tulane.

The list, subtitled "Finding Inspiration in the Year of Trump, is divided into nine categories, with Schiller being recognized in the “community” section. Others on the list include journalists Maggie Haberman and Jake Tapper; performing artists Billy Joel and Ben Platt, actors; sports figures Robert Kraft and Josh Rosen; and politicians Adam Schiff and Al Franken. Also named to the list are Ivanka Trump and Jared Kushner, daughter and son-in-law of President Donald Trump.