Philanthropy is more than ‘throwing money at a problem’ 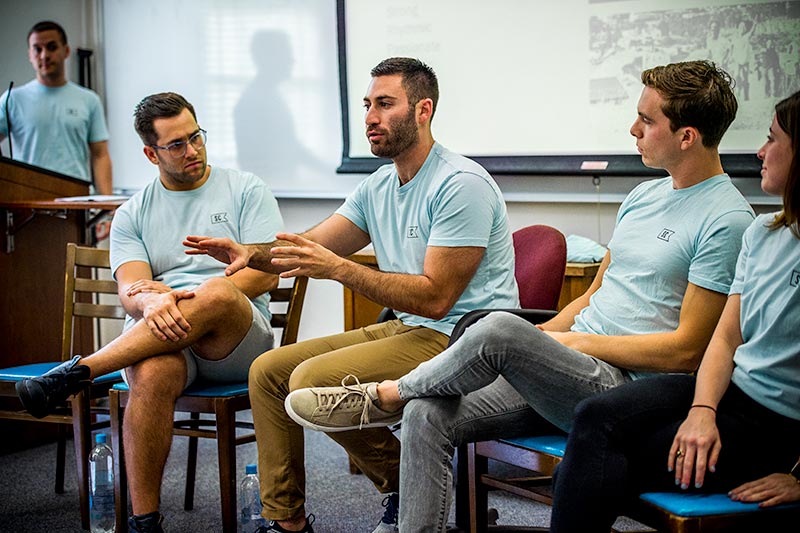 Peter Gold, center, speaks to students in the Philanthropy and Social Change course about how to start a foundation. (Photo by Ryan Rivet)

Students in the Philanthropy and Social Change course in the Tulane School of Liberal Arts learn the ins and outs of giving by distributing funds provided by The Philanthropy Lab to local organizations of their choosing.

This week, the students received a visit from Dr. Peter Gold, a Tulane alumnus and founder of Strong City, who offered guidance on creating a foundation to support nonprofit organizations.

“I invited Peter to speak to the students because he and his story reflect the true spirit of philanthropy,” said Michele Adams, associate professor in the Department of Sociology and instructor of the philanthropy course. “It’s good for them to see someone who is part of their generation. I can lecture to them, but having someone they can relate to makes a world of difference.”

“I invited Peter to speak to the students because he and his story reflect the true spirit of philanthropy.”

Gold launched the foundation with eight of his closest friends after he was shot attempting to stop a woman from being abducted in 2015.

“It was 4 a.m., and I was the only one there. I just acted on my instinct,” Gold said about the moment that would change his life. “In turn, the guy tries to rob me and ultimately shot me in the stomach.”

[Read his story in Tulane magazine]

After Gold’s recovery, Strong City was born. Today the organization works to raise funds to support community-based organizations that empower underserved youth – those who could end up following the footsteps of Gold’s shooter. In its first year, the organization raised $100,000.

Gold and four of his co-founders addressed Adams’ class, walking the students through aspects of marketing, research, starting a 501(c)3 and a list of resources offered by Tulane that often go untapped.

Philanthropy and Social Change, which is offered annually during the fall semester through the School of Liberal Arts Management Minor (SLAMM), was first offered in fall 2015. The Philanthropy Lab partners with 22 universities and provides a base amount of $2,000 per student in addition to incentives that students can work toward in order to earn more funding for their cause.

The current class is working in five teams to select from eight organizations that will receive a donation from the class. Adams said that the students have a total of $72,000 to donate when the incentives are included.

Like this article? Keep reading: Philanthropy course awards $50,000 to 9 nonprofits