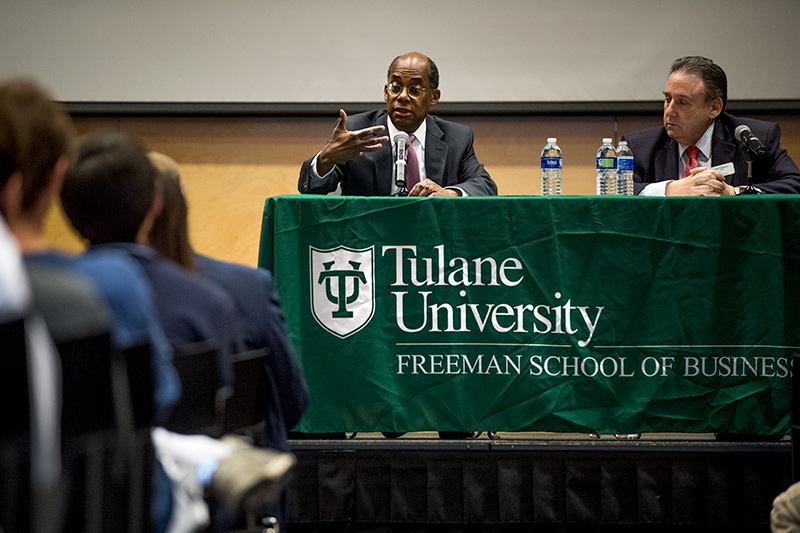 Student debt was just one of the topics covered by Roger W. Ferguson, the 2017 R. W. Freeman Distinguished Lecturer hosted by the A.B. Freeman School of Business. (Photo by Paula Burch-Celentano)

“Those who get in the most trouble with their debt are not those with the largest amounts,” said Ferguson, former vice chair of the Federal Reserve and current president and CEO of TIAA, one of the nation’s leading retirement services providers. “Ironically, the ones who default are the ones who have the smallest debt burden but who went to trade schools or other schools that didn’t give them entrée into a really high-paying job.”

While graduates of traditional universities and professional schools may amass significant debt, Ferguson said those graduates typically acquire the skills they need to land good jobs and to service their debt.

“Let’s focus on where the challenge is,” Ferguson said. “I think it’s a question of educating people and creating a high degree of awareness that when you go to one of those trade schools or for-profit schools, that may not set you up as well as you were hoping.”

Student debt was just one of the topics Ferguson addressed. In a wide-ranging Q&A session with students in the Kendall Cram Lecture Hall, Ferguson discussed Fed policy, leadership during crisis, emerging cryptocurrencies, U.S. competitiveness, globalization and the challenges of retirement.

“We were truly fortunate to have Roger serve as the 2017 R.W. Freeman Distinguished Lecturer,” said Freeman School dean Ira Solomon, who served as moderator. “The breadth and depth of his experiences and knowledge are truly amazing, and his ability to cogently communicate what he has learned along the way is even more amazing.”