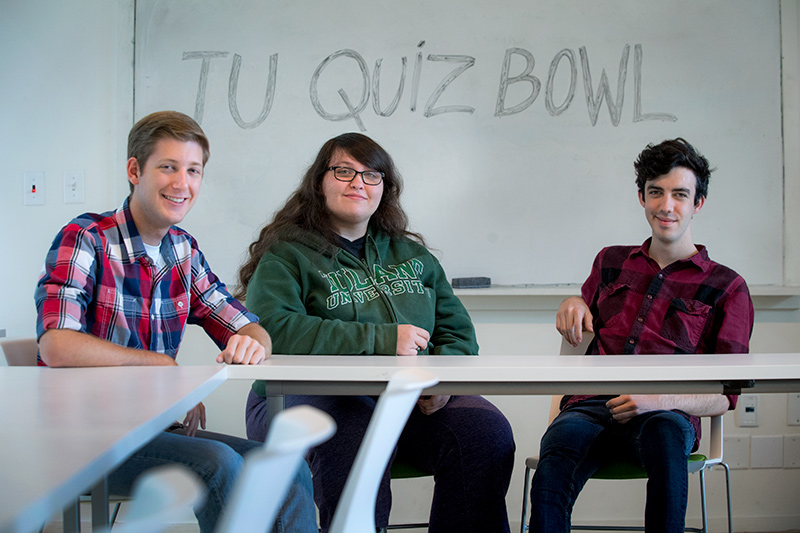 Members of the Tulane Quiz Bowl team (from left) Andrew Cerise, Brianna Tucker and Dominic Lloyd say they enjoy the camaraderie of competition most. (Photo by Paula Burch-Celentano)

Tulane Quiz Bowl’s “A” team — one of the university’s two teams — recently won first place at the Academic Competition Federation (ACF) fall competition in Austin, Texas. Now, the team prepares for the regional competition at Rice University in January 2018.

The competition consists of an hourlong match composed of 20 “tossup” questions on a variety of subjects that can be answered by anyone on the team. The questions are a paragraph in length, but the answers are short, and a correct response leads to three bonus questions on which the team confers.

“For most tournaments we play, the questions are written by players across the country, reviewed for accuracy and placed into a question bank,” said Christopher Stephens, the top scorer for the “A” team. “Studying from old tournament questions is arguably the most effective strategy because many of the same answers come up again and again.”

The cell and molecular biology major added that the questions for the regional competition would probably be more difficult than during the Austin tournament.

Tulane Quiz Bowl team members practice together, but members are free to study on their own, too.

“Most players have an area or two where they are especially strong. I’m our team’s only STEM [science, technology, engineering, mathematics] major, so I’m our science player, but I’ve been studying philosophy and literature as well,” Stephens said.

“With our performance at the fall competition, we believe Tulane “A” team will qualify and play ACF nationals,” said team president Carleigh Ebbers, a philosophy and English double major.

Stephens said his teammates are the best part of the experience. “We’ve made lasting memories together. Our team has a great sense of camaraderie, and most people come back and visit a few times after they graduate.”

Tulane Quiz Bowl “A” team members also include Dominic Lloyd, Andrew Cerise and Venu Reddy; and on the “B” team are Brianna Tucker, Emily Zurek, Greyson Kreis and Andy Sykes.

Like this article? Keep reading: Tulane docs squash the competition at Bug Bowl