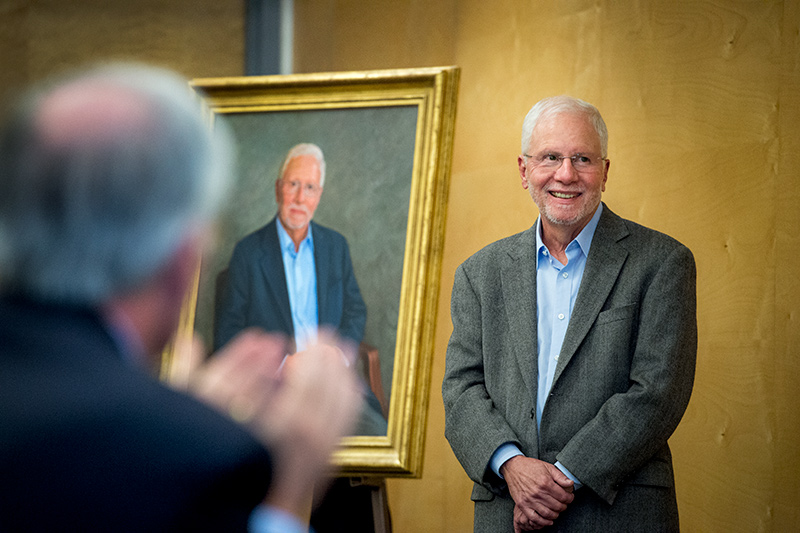 After the unveiling of his official portrait, Nick Altiero, former dean of the School of Science and Engineering (SSE), was surprised to become the inaugural inductee into the Tulane SSE Hall of Fame. (Photo by Paula Burch-Celentano)

During the School of Science and Engineering (SSE) Board of Advisors meeting on Friday, Dec. 8, in the Lavin-Bernick Center, former SSE dean Nick Altiero waited in anticipation to view his official portrait, which was painted to commemorate his innovative approach for integrating science and engineering education during his time at Tulane.

“This is a great honor. I never thought that I would see my portrait while I was still alive,” joked Altiero, while gazing at the newly revealed work by artist Michelle Kondos.

However, Altiero did not expect the surprise announcement that followed the unveiling, when he was named the inaugural member of the Tulane SSE Hall of Fame.

“When Nick came to Tulane, it changed everything.”

A plaque honoring Altiero’s legacy will be displayed permanently in the SSE Hall of Fame, which is located in the lobby of the Boggs Center for Energy and Biotechnology.

Arriving at Tulane in 2000, Altiero took on the title of SSE dean in 2006, when the School of Engineering was restructured as part of the university’s post-Katrina renewal plan.

Serving in the position through August 2017, Altiero achieved many accomplishments, including establishing the school’s community outreach programming for K-12 students, opening Maker Space, a student construction and design center, and overseeing the construction of the Donna and Paul Flower Hall for Research and Innovation.

“Working here has been beyond my wildest imagination. I love New Orleans and Tulane, so my 17 years here were fantastic. The main reason why it was fantastic was working with the great faculty and students,” said Altiero.

Embracing his new role as an honorary Tulane alumnus, Altiero also noted that he will continue to be deeply involved with the university’s future endeavors.