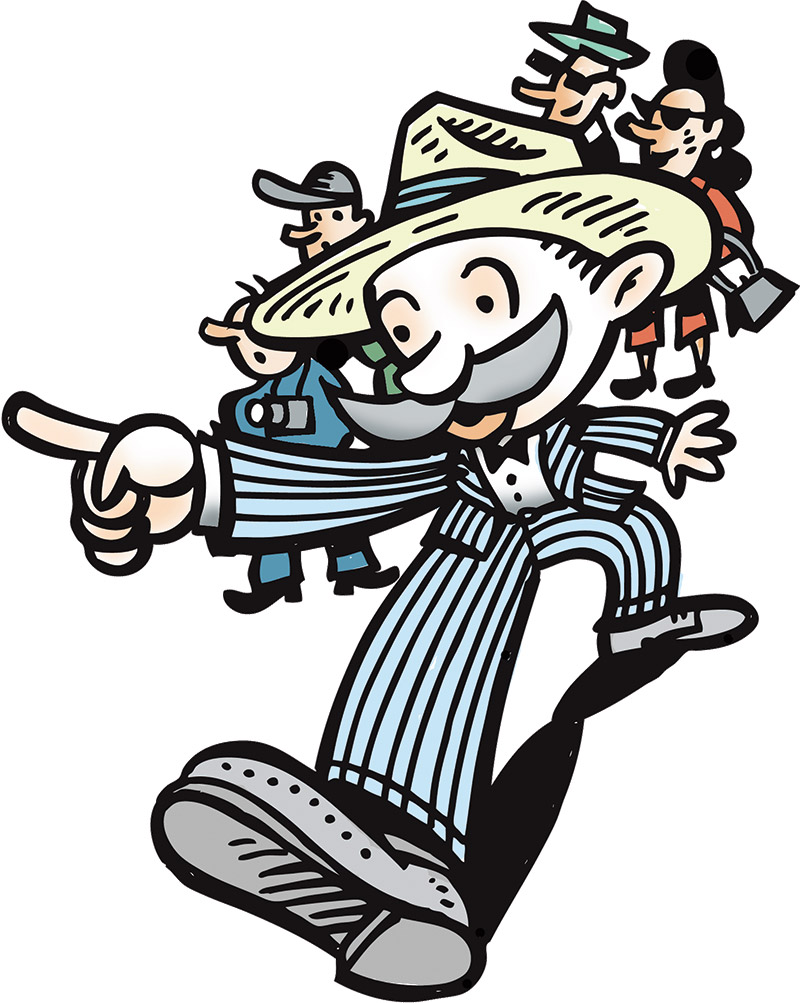 Tour guides who specialize in New Oreans history are ambassadors for the city, especially in this 300th anniversary year. (Mark Andresen illustration)

This story was originally published in the December 2017 issue of Tulane magazine.

Call them the ambassadors for New Orleans—the city’s walking tour guides, who face the daunting task of condensing 300 years of complicated and confusing history into two hours.

Imagine having to explain to people from all over the world what a dumb idea it was to build a city on a swamp, why in less than a century it went from being founded and ruled by the French to Spanish rule for 40 years then back to the French who in the blink of an eye sold it to the United States in the famous Louisiana Purchase of 1803, which doubled the size of this country. Or how we’ve survived wars, fires, floods, hurricanes, pestilence, politicians and con artists.

That alone makes them valuable assets for the city’s tricentennial celebration in 2018.

The course is advertised as a class that meets three days a week for four weeks, from 9 a.m. to 3 p.m. with outstanding speakers, experts all in different fields: architecture, immigrants and their cultural influences, slavery, free persons of color, literary history, the Battle of New Orleans, music, LGBT, port authority and more. Robby Cangelosi, who taught New Orleans architecture at Tulane for more than two decades, leads the architecture tour. Students are trained to create their personalized walking tours of the French Quarter and, without notes, complete a two-hour, one-on-one tour with an evaluator, a tour with a group and a veteran guide, and pass a city tour guide exam.

But in reality it’s a stressful six-day-a-week proposition because in between classes there are assignments, reading, studying, speaking in front of classmates and tag-along tours with guides. Factual accuracy is stressed, and part of the commitment is that each graduate must volunteer to give tours for two years. So Back to School with Rodney Dangerfield this is not.

This year’s tour guide class attracted a diverse crowd. Ruben Tapia, who received his master’s degree from the Tulane School of Public Health in 1976, came to this country by himself from Cuba in 1961 after the revolution. As a child, he lived in Cuban refugee camps in Florida and foster homes and was assisted by Catholic Charities and “a lot of loving, caring people.” His parents joined him in 1967, and he wound up in New Orleans.

Recently retired from the Louisiana State Health Department, Tapia enrolled in the Cabildo tour guide course because after being involved with the community as immunization director, he “saw the opportunity to give back to Louisiana, to the community I love.” Like the others, he found the course demanding, but he said that he “submerged myself into it. It demands total dedication. We were exposed to people with vast amounts of knowledge.” He believes he and his fellow guides will “have a big role” in the tricentennial celebration.

Sheila Ferran (NC ’73, A ’81) was inspired to take the FOC course in 2015 after taking the Delgado Community College tour guide course taught by Bill Norris, who instructed hundreds of students through the years. Ferran said Norris emphasized accuracy but also stressed that tour guides must teach history with stories. In his book, Down in New Orleans, Norris explains: “This is not a history book; it is a storybook. History is documentation of events, places or people. Stories are accounts of events, places or people told with an entertainment element in mind.”

Begue’s name ironically is based on the French verb bégayer, which means to stammer or stutter, which luckily he does not. But he does incorporate a story about that name because he is part of the family of Hypolite Begue who, along with his wife, Madame Begue, began the tradition of a second breakfast, or brunch, at their restaurant for the butchers who worked all night in the French Market in the 19th century.

Barbara Miller and her husband, Michael, moved to New Orleans from Michigan after he was hired by Tulane to be assistant director of building services. Even though they honeymooned in New Orleans in 2007, when they arrived permanently she said she felt like “being dropped on Mars.” She knew nobody, nothing about the city. So to get involved and meet people, she took the FOC course in 2010. “When you get done with that class, you know you can portray this city in its best light. The stories and history of this city you can’t make up.”

The course inspired her to go to Tulane, concentrating on courses that delved into Louisiana history. She graduated from the School of Continuing Studies in May 2017. “It sparked my interest in the Creoles, African history and the gifts of the enslaved people, which we still enjoy today.”

The recently retired longtime WWL-TV newsman Bill Capo said he shadowed a tour before taking this year’s class and saw the tour guide was having fun, which was appealing. “It’s a continuance of what I did my whole life—talking to people of New Orleans about the issues of the day. Now the subject has changed, and I’m talking to the whole world.

“We all love New Orleans,” he said. “And a New Orleanian loves nothing more than to talk about New Orleans.”