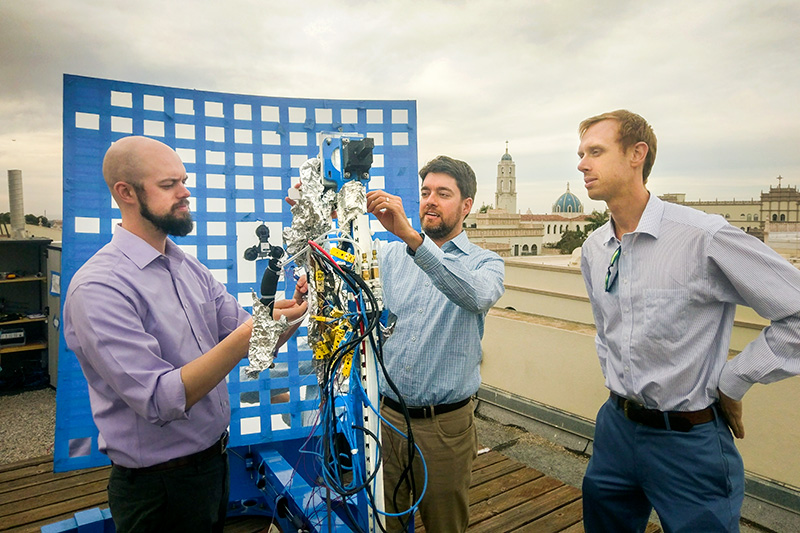 Tulane scientists, from left, Brian Riggs, Matthew Escarra and John Robertson are in the testing phase of their hybrid solar energy converter.

A Tulane University researcher is leading a U.S. Department of Energy project to develop a hybrid solar energy converter that generates electricity and steam with high efficiency and low cost.

Utilizing an approach that more fully captures the whole spectrum of sunlight, the project generates electricity from high efficiency multi-junction solar cells that also redirect infrared rays of sunlight to a thermal receiver, which converts those rays to thermal energy. The thermal energy can be stored until needed and used to provide heat for a wide range of commercial and industrial uses, such as food processing, water heating, cook stoves or enhanced oil recovery.

Matthew Escarra, an assistant professor in physics and engineering physics at Tulane, says the converter, which is being tested at an outdoor site in San Diego, was designed and built by a team that includes Tulane scientists as well as researchers from San Diego State University, the University of San Diego, Boeing-Spectrolab and Otherlab.

“The process of designing the system, building it ourselves and deploying it at our test site has been very rewarding,”

The project is part of the ARPA-E (Advanced Research Projects Agency-Energy) program, which advances high-potential energy technologies that are too early for private-sector investment.

“Full scale prototyping of new energy technologies is typically very expensive and time consuming,” Escarra said. “Because of the modularity of our system, we have been able to get to full scale within three years. The field data we are now getting is providing essential feedback to our design and prototyping process, and we’re excited about the commercial possibilities of this system.”

Among those working on the project is John Robertson, a Tulane physics graduate student.

“The process of designing the system, building it ourselves, and deploying it at our test site has been very rewarding,” Robertson said. “We are continuously improving the technology to make it better, more reliable and higher performing.”

Escarra and his team began the project in August 2014 with $3.3 million in funding. Field testing will continue through this summer, after which they hope to begin a pilot installation to demonstrate the effectiveness of the technology in a real-world application.