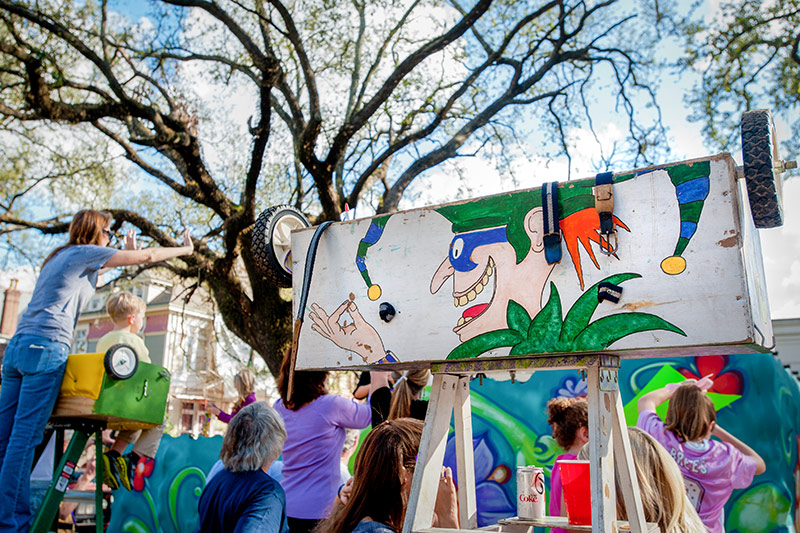 Mardi Gras ladders, a common sight during Carnival in New Orleans, can be explained in terms of an old principle called "tragedy of the commons." In this principle, the "public good" — access to space — suffers when individuals put up ladders that deprive others of access. (Photo by Sally Asher)

New Orleans may have a heavy French influence, but at Carnival, the city practices centuries-old English rules of private property.

Some scholars have argued that private property rights developed to increase individual efficiency.

“The guy next to me can’t try and steal the beads out of my hand. We would be appalled.”

Beads: Whoever catches beads keeps them, a tradition called the rule of capture. They who capture, win — and they need not consider the needs of other individuals or the public good.

“The guy next to me can’t try and steal the beads out of my hand. We would be appalled,” Richardson said.

Ladders: Ladders and roped-off neutral ground plots from which people watch parades show the tragedy of the commons, an outgrowth of the rule of capture. Ecologist Garrett Hardin wrote about it in 1968, using the example of a public field. If multiple cattle owners placed their herds on the field to feed for free, they bear none of the costs but stand only to gain. The field eventually becomes depleted, so the public good is said to suffer at the hands of individuals who exercise their own interests.

During Carnival, “it’s a tragedy because you’ve got three people who are occupying awesome neutral ground space and everybody else is crammed together, fighting for the last blade of grass,” said Richardson.

“Prize” throws: Glittery shoes or coconuts that are virtually worthless show that valuation is fluid. In 2016, Brown wrote on PropertyProfBlog: “My experience … with the [Krewe of] Muses shoe gave me three takeaways about valuing property: The laws of supply and demand are real … Scarcity sometimes trumps reason … There are things that are worth our time, but not our money.

“These are certainly not novel insights; they are pretty pedestrian observations,” she added.

Still, they’re important because during Carnival and beyond, what we value as “good” or valuable changes over time, Richardson said.

What does not change is an understanding of the concept of ownership: “It is fundamental to the way that we operate our society,” she said. “That’s one of the reasons I find property law so fascinating.”