Ahead of the class 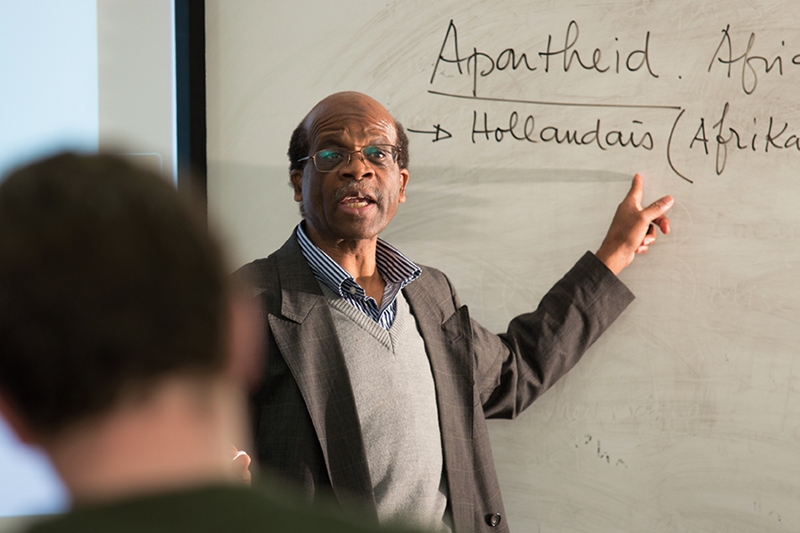 Jean Godefroy Bidima, holder of the Yvonne Arnoult Chair in Francophone Studies, teaches courses in advanced French and philosophy of the self, society and institutions. (Photo by Kathy Anderson)

Justice does not end with punishment. Knowledge differs from wisdom. Resilience is a way to resist shock.

These are among the themes of Jean Godefroy Bidima’s courses in advanced French and philosophy of the self, society and institutions.

Sometimes at the end of class, he says, students come to him and say sincerely, “Oh, sir, I do thank you because when I entered your class, I did not know that. Now I know that, and what you taught me is not only to have a grade but it is how to behave as a member of our common humanity.”

Adriana Amador is a student whose understanding of the world was changed by Bidima.

A second-year student on a pre-med track with a psychology major and French minor, from San Juan, Puerto Rico, Amador took Bidima’s class last spring. She says that before she always thought that justice was synonymous with law. However, Bidima changed her perspective on that—and everyone’s in the class. True justice is “more about reconciling with people after they are judged,” she says.

For his part, Bidima says, “That was my strategy on this course on justice. Justice is not to crush the individual. It is to redeem the person, to secure the community and enrich the institutions.”

The kind of exchange that happened between professor Bidima and his student Amador occurs in countless faculty-student interactions all over Tulane.

For a university to be truly great, it depends upon well-informed and caring teachers.

Tulane has many such teachers and has had for years—as thousands of graduates can attest.

To move forward, Tulane plans to continue to invest in its professors.

Editor's note: This story was originally published in the March 2018 issue of Tulane magazine. Continue to full article.