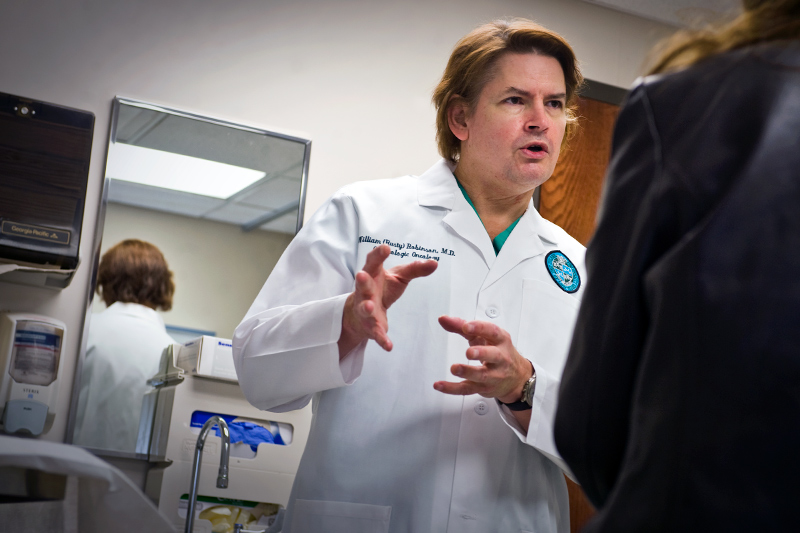 William “Rusty” Robinson, MD, head of the Section of Gynecologic Oncology at Tulane University School of Medicine, received a $65,000 grant from the Louisiana Cancer Research Center to implement a smoking-cessation program for cancer patients. (Photo by Paula Burch-Celentano)

William "Rusty" Robinson, MD, head of the Section of Gynecologic Oncology at Tulane University School of Medicine, recently received a $65,000 grant from the Louisiana Cancer Research Center (LCRC) to implement a smoking-cessation program for cancer patients.

Cigarette smoking and tobacco use have been associated with the development of multiple cancers, including lung, genitourinary and gynecologic malignancies. Therapies like radiation and chemotherapy have been shown to be less effective in smokers than in non-smokers, and smoking has been identified as the single strongest predictor of complications related to some cancer treatments.

“We found ... that all of the women who participated in the program were smoke-free at six months.”

“This new program is modeled after one my team implemented in the gynecologic cancer clinic at Tulane a couple of years ago,” he said. That program augmented the resources of the Louisiana QUITLINE — a free and confidential tobacco-cessation helpline that links people who want to quit with trained cessation specialists who create an individualized plan.

Robinson and his team had noticed that just mentioning the resource to patients wasn’t really working.

“They needed an additional push. So we added one-on-one interventions by a trained person — a registered nurse or social worker within our clinic — who used prepared scripts to counsel and encourage participants to utilize the QUITLINE program.” Personal counseling sessions — to answer questions and/or offer encouragement — were provided weekly for 12 weeks.

“What we found was that all of the women who participated in the program were smoke-free at six months,” said Robinson. ”With this new LCRC funding, we plan to expand and offer this program to all newly diagnosed cancer patients — not just gynecologic patients — seen at Tulane and University Medical Center.”

Robinson and his team also found ethnic differences in their initial study, with African-American patients less likely to participate in the program.

“So while this new study is meant to improve upon the effectiveness of the Louisiana QUITLINE, we also hope to evaluate racial barriers to its utilization.”

Collaborating with Robinson’s team on this project are researchers and clinicians from University Medical Center, Louisiana State University and Xavier University.