Neuroscience and dance set the stage for a career helping others 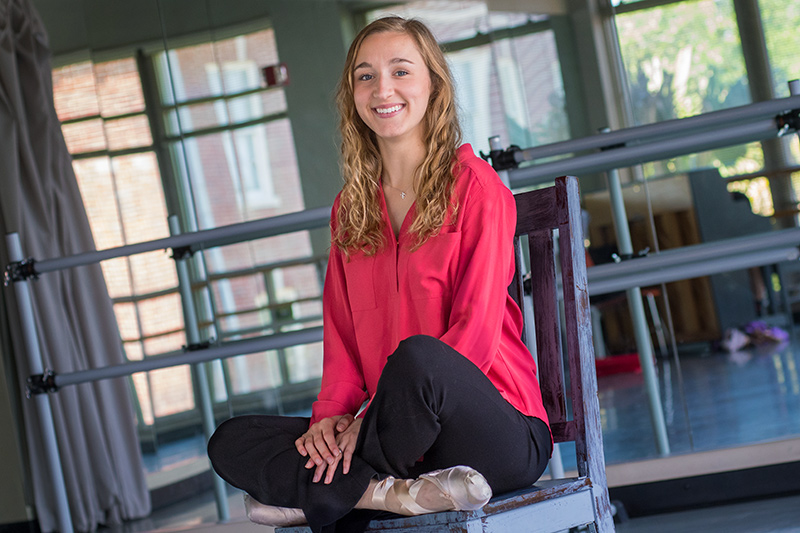 Sophie Rhines, who studied neuroscience and dance at Tulane University, will use both as she pursues a career in physical therapy. Rhines said she is excited to investigate the crossover between the arts and therapy. (Photograph by Sally Asher)

When Sophie Rhines arrived at Tulane University, she was not set on a specific major or a specific path for post-graduation plans. She knew she enjoyed science, but she also wanted to fit her love of dance into her college education.

Now, as a brand-new alumna of the Class of 2018, Rhines will use elements of her double major in neuroscience and dance when she enters a three-year physical therapy program at LSU Health Sciences Center in New Orleans.

The complementary nature of Rhines’ double major in the School of Liberal Arts and School of Science and Engineering wasn’t immediately obvious to her, either. But as she pursued physical therapy internships, she was drawn to the neurological patients — individuals who were recovering from strokes and automobile accidents and who were dealing with neurodegenerative conditions — and she began to think about the science behind the movement of the human body.

“It’s been so interesting for me to bridge the gap between the study of movement and the study of the brain.”

“It’s been so interesting for me to bridge the gap between the study of movement and the study of the brain, and how you can retrain your brain to perform those movements,” she said.

“The arts are being used so much more now as a form of therapy — I think that’s amazing,” Rhines added. “People are now coming to realize that the arts trigger your brain in a better way than we might have ever thought,” even improving cognition in some cases.

At Tulane, Rhines was active in the Tulane University Neuroscience Association, where she served on the board for two years, as well as the Newcomb Dance Company, where she performed and choreographed.

“I enjoy being able to be up onstage and live in that moment, feel the others around me, share the space with them,” Rhines said. “It’s a really collective energy.”

Now, with only four days between commencement and her first physical therapy classes, she will put her interdisciplinary studies to work as summer starts.

“This is what I’ve been wanting to do, and I worked hard to get here,” she said. “I feel rewarded by this experience. It all came together.”