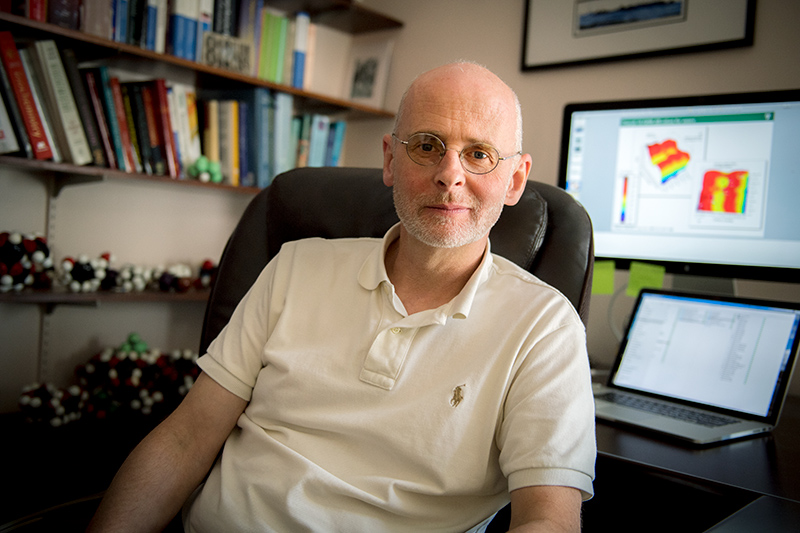 Tulane chemistry professor Bruce C. Gibb will spend the next four years on a study that could shed light on the molecular details of Alzheimer’s and Parkinson’s. (Photo by Paula Burch-Celentano)

Tulane University chemistry professor Bruce C. Gibb has been awarded a $1.65 million grant for research that could shed light on the molecular details of such diseases as Alzheimer’s and Parkinson’s.

The four-year grant from the National Institutes of Health will enable Gibb and his team to study how poorly solvated ions in water can induce the Reverse Hofmeister Effect (RHE) – the phenomenon in which a substance such as a protein, becomes less soluble in water in the presence of certain salts.

“We are hoping that our studies will give a better understanding of the RHE and hence why some proteins go awry and cause diseases like Parkinson’s and Alzheimer’s as well as protein deposits in the cardiovascular system. However, what we do is fundamental research, and so its impact on those diseases is some ways down the road.”

"What we do is fundamental research, and so its impact is some ways down the road.”

Gibb said the properties of dissolved organic molecules and salts have been studied for over 130 years, but much is still unknown about the laws governing how they interact.

While some salts can lead to an increase in the solubility of a protein, the same salt might bring about a decrease in solubility of another protein and lead to it forming plaques or insoluble buildups (the RHE).

“Our understanding of the molecular interactions behind the RHE is limited, Gibb said.  “Indeed, it is only in the last decade that it has been confirmed that the key non-covalent interactions are those between the negatively charged ion of the salt and positively charged groups on the protein.  Beyond this, details are sparse.”

He said the long-term aim is to determine the underlying causes of these types of diseases so that physicians can recommend dietary changes or medications to their patients.