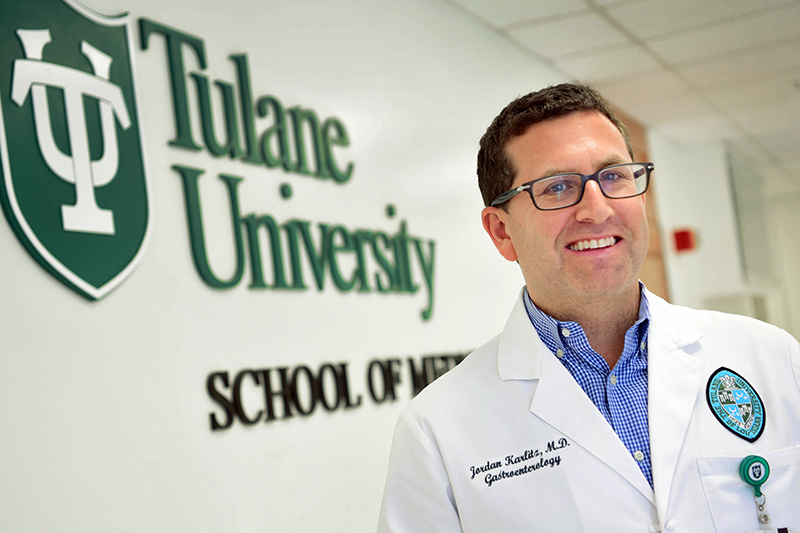 Jordan Karlitz, MD, of the Tulane School of Medicine faculty, recently published a study that sheds light on the barriers that prevent physicians from consistently testing patients for a common hereditary syndrome that carries a high risk of developing colorectal cancer. (Photograph by Cheryl Gerber)

A new national survey study in Clinical and Translational Gastroenterology assesses barriers to physicians’ experience when testing for a common hereditary syndrome that carries a high risk of developing colorectal cancer (CRC).

Lynch Syndrome, a hereditary cancer disorder that may occur in one out of 300 Americans, causes CRC in up to 80 percent of cases. Lead author Jordan Karlitz, MD, director of the Hereditary GI Cancer and Genetics Program and associate clinical professor of medicine at Tulane University School of Medicine, had previously demonstrated in the American Journal of Gastroenterology that, of high-risk, early-onset CRC patients studied in Louisiana, only 23 percent had tumor testing for Lynch Syndrome.

Testing rates should be 100 percent, Karlitz said. The new study strives to better understand why testing is so inconsistent.

“We want to maximize genomic education in all specialties. There’s a greater integration of genomic information in patient care decisions nowadays.”

The new study suggested that responding physicians, mainly gastroenterologists, had reservations about testing cost, unfamiliarity interpreting results, unavailable genetic counseling or lack of clarity on what type of doctor — gastroenterologists or pathologists, for example — should order testing.

The study also demonstrated that only 46.1 percent of respondents felt screening should take place during a preoperative colonoscopy biopsy, as opposed to during CRC surgery. Preoperative testing can help guide germline genetic testing decisions and the extent of colonic resection surgery.

“We need to push more for ‘reflex’ testing, so that testing automatically gets done,” Karlitz said. “That requires protocols to be set up in medical facilities. The other issue is, just because testing is performed, someone [must be] responsible for actually acting on the results.”

Lynch Syndrome gene mutations can be compared to BRCA, the gene that is associated with increased breast cancer risk. Knowing whether someone has Lynch Syndrome can significantly affect his or her treatment and follow-up care. It’s also critical information for family members, who may carry the same gene.

“We want to maximize genomic education in all specialties,” Karlitz added, noting that Lynch Syndrome is associated with other types of cancers as well. “There’s a greater integration of genomic information in patient care decisions nowadays.”

The study was published in September and is available online.