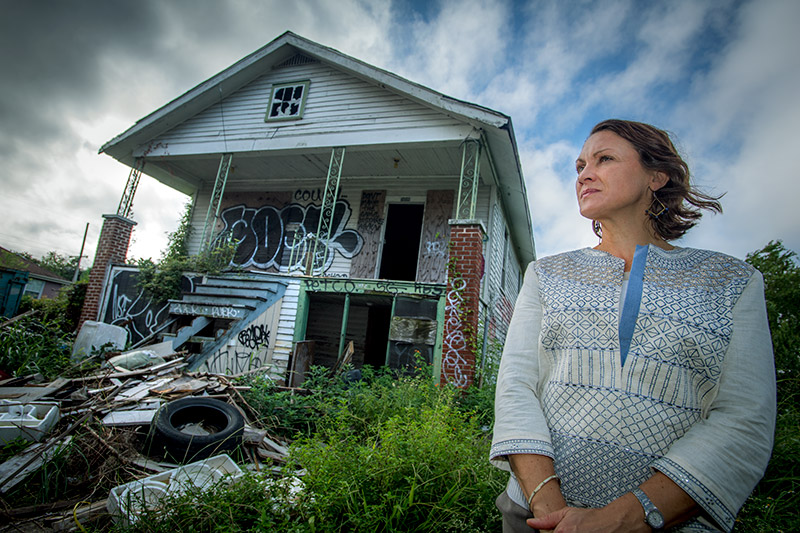 Can cleaning vacant lots cause a chain of events that curbs child abuse or stops a teen from falling victim to violence?

That’s the provocative question behind a new Tulane University research project to study whether maintaining vacant lots and fixing up blighted properties in high-crime areas reduces incidents of youth and family violence. The National Institutes of Health awarded Tulane a $2.3 million grant to test the theory in New Orleans.

Researchers from Tulane’s schools of Public Health and Tropical Medicine and Architecture will work closely with the city of New Orleans and community organizations to clean up 300 blighted properties across the city. They will split the properties into two randomized intervention groups — half featuring overgrown vacant lots that are cleared and maintained and another featuring both remediated buildings and lots.

Researchers will compare crime rates in the intervention groups with those in matched, untouched control areas to see whether mending disordered spaces can trigger healing psychosocial effects within a neighborhood.

“To our knowledge, no other studies have examined the impact of blight remediation on youth and family violence, specifically,” said principal investigator Katherine Theall, PhD, Cecile Usdin Professor in Women’s Health. “However, research on other forms of neighborhood disorder suggest that it could have a substantial impact.”

Researchers liken the remediation efforts to early urban public health campaigns to make cities safer by cleaning up sewerage and water systems to prevent the spread of disease. Only this time the pathogen is crime, and they think its spread can be interrupted similarly within disordered neighborhoods.

Theall will collaborate with Columbia University epidemiologist Charles Branas, who has extensively studied blight remediation as a crime reduction strategy in other cities. One of his recent studies in Philadelphia found that gun assaults declined 9 percent in the 18 months following the cleaning up of vacant lots in high-crime areas.

In addition to providing fewer locations for storing illegal weapons, the team’s theory is that blight remediation will reduce perceived stress among residents and improve their sense of community and social control, which may reduce social isolation and potential family violence.

“Disordered communities have been shown to have more violence,” Theall explains. “There are a couple of theories as to why that is.  One is that with greater disorder, there is less social control or eyes on the street that could potentially prevent some forms of violence. In the case of intimate partner violence or child maltreatment, if there's less cohesion, neighbors may be less likely to intervene.”

Tulane researchers will look at the impact of blight remediation on incidents of youth violence, property crimes, school arrest rates, and violence-related injuries and deaths. To track family violence, they will examine incidents of child abuse and neglect and intimate partner violence.