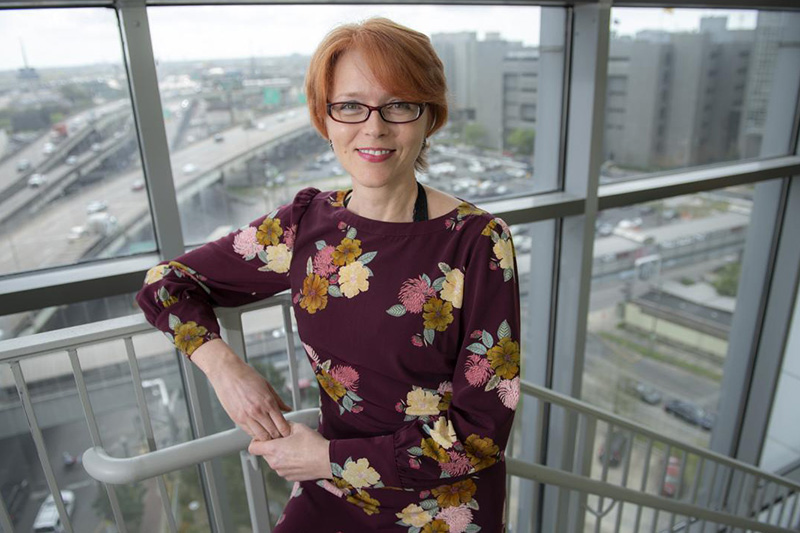 Victoria Belancio, PhD, who received a grant from the Brown Foundation to support her research, is exploring “the dark matter of genomes” in an effort to better understand its connection to cancer and other human diseases. (Photo by Paula Burch-Celentano)

Genetic instability is the underlying cause of all cancers, and several studies have focused on the mechanisms by which genes are mutated to initiate oncogenesis – the process through which healthy cells become transformed into cancer cells.

“However, roughly 50 percent of mammalian genomes – ‘the dark matter of genomes’ – has been systematically excluded from these studies because individual elements often can neither be easily distinguished from one another, nor properly mapped,” said Belancio.

Belancio’s lab team has designed molecular and bioinformatics tools that allow them to identify individual elements and expression patterns of a particular class of highly repetitive DNA sequences within the “dark matter” called Long Interspersed Element-1 (L1). L1 has enzymatic activities that introduce nearly random mutations into the genome, including genes that initiate or promote oncogenesis.

“The number of L1 elements present in individual human genomes varies in the human population,” said Belancio. “However, the full extent of this variation and its clinical relevance are poorly understood. Our preliminary findings in mouse models and cancer patients support that this variation may play a role in human health, including cancer.”

This project is designed to begin a rational approach toward a better understanding of the connection between L1 and human disease.