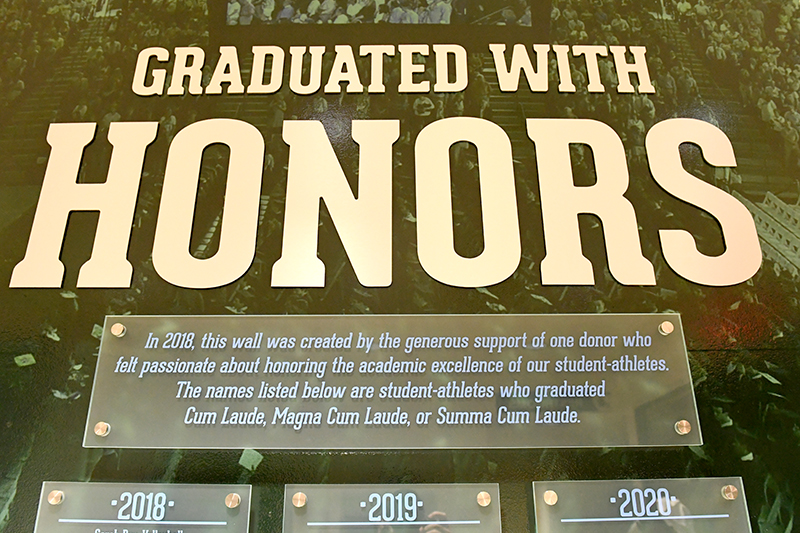 Tulane Athletics displays the “Graduated With Honors” Wall, which highlights the academic achievements of graduating Tulane student-athletes. It was made possible by a gift from Don (A&S ’81) and Lora Peters. (Photo by Parker Waters)

Tulane University student-athletes are known for their excellence on the field and in the classroom, and now the best of the best are receiving recognition on a wall in the James W. Wilson Intercollegiate Athletics Center. The “Graduated With Honors Wall” was made possible by the generosity of Tulane alumnus Donald Peters and his wife, Lora.

Supporting the Green Wave is a point of pride for Don (A&S ’81) and Lora Peters; the dedicated pair has contributed more than $3 million to the Green Wave Club and Tulane Athletics.

Ben Weiner Director of Athletics Troy Dannen said, “Tulane student-athletes are a remarkable breed. They demonstrate the same exceptional work ethic and drive to achieve whether they are on the field or in the classroom, and it’s wonderful to be able to recognize that in a meaningful way.”

“Student-athletes who receive Latin honors, which are awarded to graduates at the top of their class, are listed on the wall, and they are also given a trophy,” said Charvi Greer, senior associate athletic director for academics.

The Graduated With Honors Wall is located just outside the Robert “Bob” Cudd III Academic Service Center, which houses advisors who work with student-athletes. There, student-athletes get the tools to be successful in both athletics and academics, such as tutoring, mentoring, life skills and career development.

“It takes a special person to be a successful student-athlete at Tulane, and we have so many,” said Greer. “Tulane is a high academic-achieving institution with the same expectations for athletics as any Division I institution. Tulane student-athletes spend long hours challenging their minds and their bodies.”

“A big part of the reason that I initially chose to come to Tulane is because it has top 40 academics and Division I athletics,” she added. “When you come to Tulane there’s an expectation for excellence both in academics and athletics. I don’t think I could have had a better academic experience than I had at Tulane.”

The inaugural names from the Class of 2018 include: