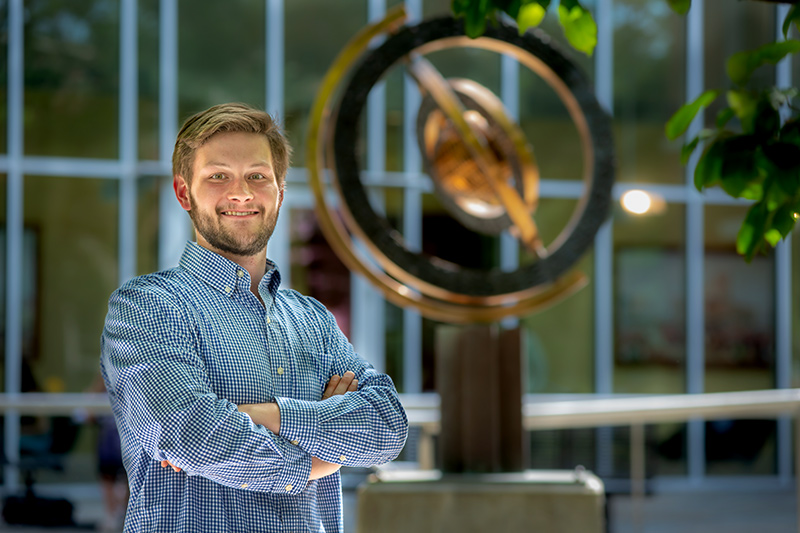 David Woodside, who is a gonfalon bearer at University Commencement on Saturday, May 18, will graduate with bachelor’s degrees from the School of Liberal Arts and the A. B. Freeman School of Business. He is an Altman Scholar in the Altman Program in International Studies and Business. (Photo by Sally Asher)

David Woodside is on his way to immerse himself in Ukraine.

He graduates on May 18 with bachelor’s degrees from both the School of Liberal Arts (in political economy) and the A. B. Freeman School of Business (in management).

During his four years as a Tulane student, he has been an Altman Scholar in the Altman Program in International Studies and Business, studying on four continents. He spent time in Southeast Asia, Morocco and France, learning to communicate in various languages, studying the society, economy and history of these countries, and acquiring the skill-set needed to travel abroad successfully.

Now through a rigorous and competitive application process, he’s been accepted into the Peace Corps, taking his expertise and knowledge, along with a winning personality and open mind, to Ukraine.

It will be a little bittersweet to leave New Orleans to travel outside of Kiev in mid-August for the Peace Corps, said Woodside. But he feels prepared.

As an Altman Scholar, he said he has acquired the ability to compare and contrast different cultures. The post-Soviet culture of Ukraine is obviously quite different from the cultures of Vietnam, Morocco and France. Through his travels and study abroad experiences, though, he said, “You start to see a common thread. People are people.

“People are welcoming. If you go in with a smile, they’ll take care of you. They want to put on a good face and represent themselves well.”

Even if missteps are made and communication cues are missed, “you learn,” said Woodside.

“There is a commonality of humanity.”

After intensive three-month language training in Ukraine, Woodside is slated to do business development with small business owners, local governments or nongovernmental organizations. He’s not certain what his specific Peace Corps assignment will be.

“It should be pretty cool,” he said. “And a little scary.”