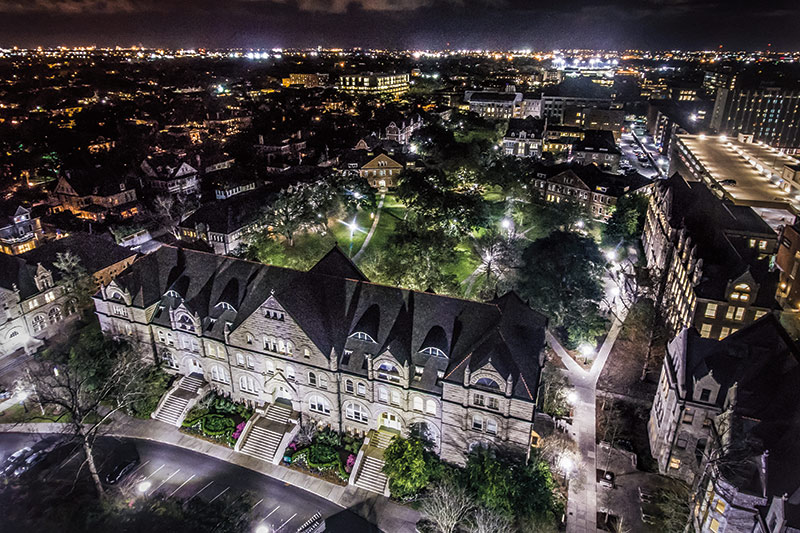 Tulane’s operations, capital investments and other activities as a leading educational and research institution contribute $3.14 billion to the Louisiana economy each year. Photo by Lorenzo Serafini Boni and Richard Campanella.

With its life-saving research and a mission that encourages students, faculty and staff to use their knowledge, skills and discoveries to solve the most pressing problems of our times, Tulane University is “a force for good at the local, regional and global levels,” according to a new economic study by Philadelphia-based Econsult Solutions.

Tulane’s operations, capital investments and other activities as a leading educational and research institution contribute $3.14 billion to the Louisiana economy each year and are responsible for more than 19,000 jobs statewide, according to the report. As New Orleans’ largest private employer, the university generates 13,934 jobs in the city alone and attracts $312 million in spending by visiting parents, alumni, patients and potential students.

Tulane President Mike Fitts said the report confirms that Tulane is not only a primary economic driver locally but is destined to be a leader in reimagining the possibilities for New Orleans, the Gulf South and beyond.

“The late Sen. Daniel Patrick Moynihan famously said, ‘If you want to build a great city, create a great university and wait 200 years.’ Tulane is approaching its 200-year anniversary and New Orleans recently celebrated its 300th, so our time has arrived,” Fitts said.

Fitts said Tulane is focused on the major role that universities in cities such as Pittsburgh and Nashville have played in revitalizing their hometown’s core and vaulting entire regions to greater national and international prominence. He said Tulane hopes to replicate this success especially through institutional investments in downtown New Orleans, where it already occupies 17 buildings.

Along with other investments downtown where the university has already added numerous security lights, cameras and a Tulane University Police Department substation, Tulane plans to be an anchor tenant in the revitalization of the iconic Charity Hospital building as well as other downtown properties, filling up a minimum of 500,000 square feet with laboratories, clinical space, classrooms, student housing and more. In doing so, the university will also stimulate, along with the city and other partners, a neighborhood of retail shops and a vibrant street scene within a robust innovation district.

Such long-term and varied investment — from recruiting world-class scientists, students and faculty to working with local school children and incubating local startups — is what differentiates Tulane’s economic impact from other private entities, according to the report.

“Many businesses have an economic impact but the breadth and depth of Tulane’s social and economic impact is unique,” Fitts said. “It includes everything from improving Pre-K to 12 education to training the next generation of local doctors, to studying the best methods for rebuilding our coast. It also entails creating a better workforce, preserving folkways, bringing fresh new talent to the city and much, much more.”

When it comes to employment, the report points out that Tulane jobs tend to be better paying than positions in many other local industries, and its total employee compensation of nearly $585 million has a significant “spillover” effect, stimulating the local economy and leading to higher employment. The same goes for the university’s procurement activities, which generate millions in local tax revenue.

The university also continues to be a major brain magnet, drawing top students from around the country (25 percent of whom become permanent residents after graduating) and recruiting faculty and researchers from Johns Hopkins, the Cleveland Clinic and other leading institutions. This has a substantial impact on the city and the region’s economy and quality of life, according to the report.

Much of the report focuses on Tulane’s dual role as a vital local institution and a global force. For example, in addition to spending more than $193 million on infectious disease research and other innovations that impact the world, the report highlights Tulane’s outsized role in the local and state economy, noting its investment in New Orleans Pre-K to 12 education, the comprehensive health care it provides with more than 500 physicians and the 750,000 hours of community service performed by its students, faculty and staff.

The full report is available at https://president.tulane.edu/impact.