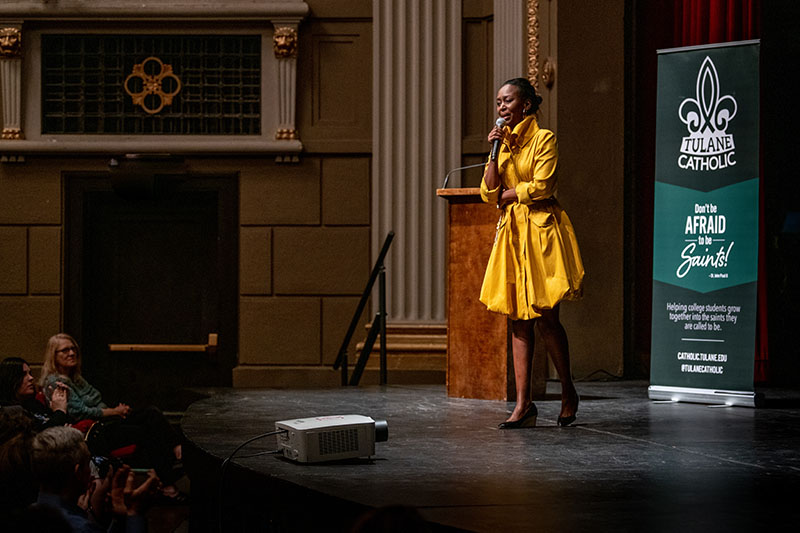 Immaculee Ilibagiza, a survivor of the 1994 Rwandan genocide, addresses the audience at Dixon Hall on Jan. 24. Her speech, which recounted her experiences hiding from machete-wielding mobs, was the keynote address for Tulane Catholic Center. (Photo by John Bihm Photography)

A survivor of the 1994 Rwandan tribal genocide provided a riveting account of her experiences, including a journey to forgiveness, during the Tulane Catholic Center keynote address on Jan. 24.

In the event at Dixon Hall, author and speaker Immaculee Ilibagiza recounted the three months she spent hidden in a 3-foot-by-4-foot bathroom, huddled with seven other women, while the massacre unfolded around them.

“I remember pain like a thousand needles going through my body, to wait for them, to think of what they’re going to do when they find you.”

Ilibagiza, a Tutsi tribe member, was reared in a Catholic family in Rwanda. She was a college student in 1994.

When the president of Rwanda was assassinated that year, Ilibagiza’s family gathered around the radio, listening to the hate speech that dominated the airwaves. Neighbors began to arrive at their home, asking her father for advice. In the last hours that Ilibagiza saw her family, her father made a grim prediction.

“He said, ‘If it is a bad office or a group that is trying to hurt us, do not be scared. We will defeat them.’ And then he said, ‘However, if it is a government that plans to hurt, to kill us, I cannot lie to you: They will do it. They have the police, they have the military, and they blocked the borders.’”

Nonetheless, he encouraged his neighbors, whom Ilibagiza said represented many different faiths, to use the opportunity to repent any wrongdoing and embrace God.

There was little time to reflect; Ilibagiza was immediately sent to the home of a pastor, a member of the “rival” Hutu tribe, to hide with the other women.

Machete-wielding mobs roamed the villages, searching the houses, but either gave up or somehow missed the bathroom where they hid.

When searches took place, “I remember pain like a thousand needles going through my body, to wait for them,” she told the audience, “to think of what they’re going to do when they find you.”

Some days, waiting for death, she fought her own impulses. “One voice was telling me, ‘Open the door. End the torture. Why wait for them to catch me when they will catch me anyway?’”

Another inner voice prevailed, a voice that told her to rely on faith to cope with her despair and anger. She felt she couldn’t maintain her Catholic perspective without forgiving, and that it gave her peace for what she was going through.

Ilibagiza spent 91 days in the bathroom, until the killings ceased. She weighed 65 pounds. She learned all her family members and many of her neighbors and friends had been killed in just three months. Her home had been destroyed. She was destined for a refugee camp.

Inspired by the Catholic example of Jesus, she thought, “your journey on earth is not over, and you don’t know how long it’s going to be. What is in your power is to choose how you use your life. You can choose to be loving, or to be unkind and mean, hateful.”

“I really have to insist on this: Not everyone was bad in the other tribe,” she said. “It was the government who was saying in the name of ‘we’ to be able to hate people, and that worked to scare people.”

She again recalled her father’s wisdom. “My father, who was always teaching, he used to tell us, ‘Do not put people in boxes. You don’t know who God is going to send you when you need it the most.’”