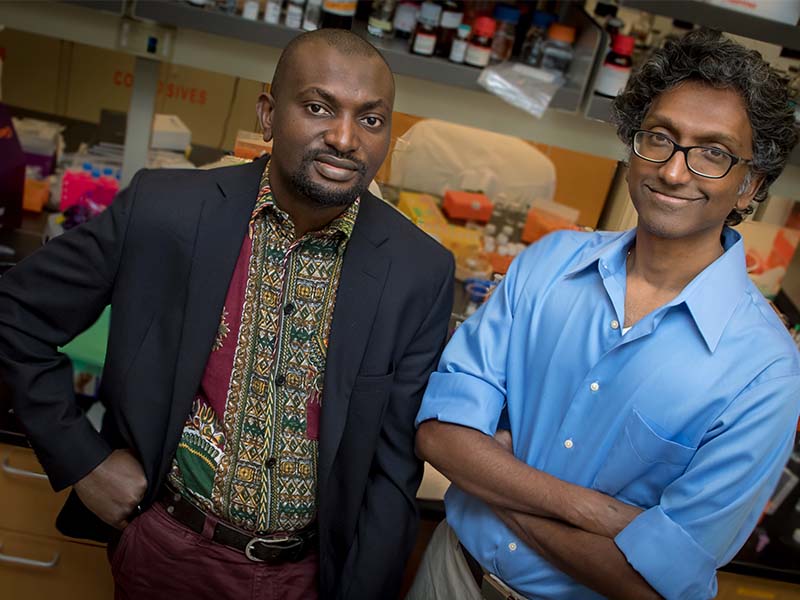 Mellon Fellow Taofeeq Adebayo (left), a PhD student in linguistics, is pictured with Mellon Fellow Janarthanan Jayawickramarajah, a chemistry professor, in October 2018. Adebayo and his collaborators translated a science textbook into Yoruba for use in Nigerian classrooms. (Photo by Sally Asher)

Where else but in New Orleans—and at Tulane—can a Mardi Gras Indian Queen, a labor-union organizer, a Quaker activist and an immigrants-rights advocate team up with chemistry, anthropology and art history professors to teach graduate-level humanities students over jazz, poetry and red beans and rice?

For more than three years, that’s what the Tulane Mellon Graduate Program in Community-Engaged Scholarship in the Humanities has done at various times. Now, thanks to a new $1.5 million grant from The Andrew W. Mellon Foundation, this signature, multidisciplinary program based at the School of Liberal Arts is set to widen its scope to include undergraduates, new community relationships through more public events and more groundbreaking work on a national level.

Launched in 2017 with an initial $1.5 million from the foundation, the Tulane Mellon Graduate Program is a project of the Office of the Provost and the School of Liberal Arts in conjunction with the Center for Public Service.

“Learning through multidisciplinary collaborations and engagement with community leaders and culture bearers is central to the Tulane experience and is the Mellon program’s primary goal.”

“Learning through multidisciplinary collaborations and engagement with community leaders and culture bearers is central to the Tulane experience and is the Mellon program’s primary goal. We are grateful for this new Mellon Foundation grant which will increase opportunities for our students while expanding our partnerships with organizations that serve our neighbors in New Orleans and throughout the world,” Tulane President Michael Fitts said.

A cohort of 20 participants meets regularly for two years through the Mellon Graduate Program. Each cohort has 12 graduate students, or “Mellon Fellows,” four Tulane faculty members and four community representatives with differing kinds of expertise.

Most professors are from the School of Liberal Arts, but participation is open to Tulane’s other eight schools. The community partners represent organizations such as ACORN International, the American Friends Service Committee, the Ashé Cultural Arts Center and Project Ishmael.

With special attention to equity and social justice issues, each Mellon Fellow takes three one-credit-hour courses on theory and methods and completes a scholarly project to earn a certificate.

Some projects have a local focus, from the creation of a renter’s guide to low-income housing tax credits in Orleans Parish to musical collaborations with Preservation Hall. Other projects go beyond New Orleans, from writing a science text in the Yoruba language of West Africa to protecting Maya archaeological sites in Guatemala.

The Mellon Foundation’s latest grant will grow the program by increasing participation at both the undergraduate and graduate levels. Mellon Fellows will recruit juniors and seniors committed to racial and social justice by inviting them to join their diverse, interdisciplinary teams. Likewise, they will enlist graduate students who are not in the program.

The Tulane program also will expand its local network by co-sponsoring even more community events that connect activists, artists, and scholars—like one offered before the COVID-19 pandemic at the Neighborhood Story Project, which featured Houma Nation documentarian, Monique Verdin.

In addition, Tulane will help lead a national dialogue on community-engaged humanities scholarship by collaborating further with Imagining America: Artists and Scholars in Public Life, a consortium based at the University of California, Davis. Tulane also will contribute to Imagining America’s Leading and Learning Initiative, a Mellon Foundation-funded project to propagate community-engaged programs.

“The vibrant and complicated city of New Orleans provides the perfect setting for a wide array of fascinating and novel research projects on issues of deep relevance both within and beyond the academy,” Forman said. “In this program, city leaders serve as co-mentors for our students and enrich and broaden the perspectives of all participants.”

“The Mellon Foundation’s support allows us to take the crucial next step in developing and deepening ties between Tulane and New Orleans,” Edwards added, “as well as attracting students from the next generation—especially those committed to racial and social justice—to careers in the humanities and building a more effective pipeline.”

As Mellon Fellows graduate, they take the unique lessons they’ve learned with them.

“Our graduate students, we hope, will be future faculty members and promote this kind of equitable work and scholarship wherever they go,” said Agnieszka Nance, executive director of the Center for Public Service.

The program is as enriching for the participating community leaders as it is for the students. “The Tulane Mellon Program has been a seamless experience for me,” said Cherice Harrison-Nelson, who—as Big Queen of the Guardians of the Flame—began sharing her knowledge of Mardi Gras Indian and Black masking traditions with the 2019 cohort. “I receive as much as I give, and I don’t know when I’m receiving and when I’m giving—because I’ve received so much from being a part of it.”

The lessons also are unforgettable for Ryan McBride, an administrative associate professor of English who directs the program. “In New Orleans, we are surrounded by people with deep wisdom and an understanding of the complexities of culture and relationships,” he said. “The community leaders in our program are brilliant and doing some of the most important work around our city. They’re with us not as guest speakers but as part of our cohort for two years. At our best, it feels like family when we’re together.”