Three new members join the Board of Tulane 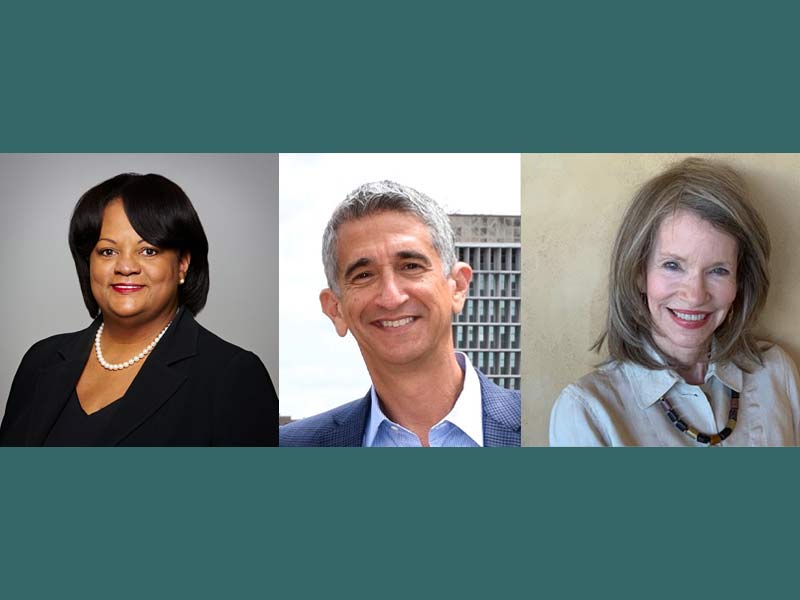 Dr. Regina Benjamin (left), Richard M. Lerner and Martha Murphy have joined the Board of Tulane.

Three new members have been named to the Board of Tulane, the university’s main governing body. The newly elected board members, who began their appointments on July 1, 2021, include Dr. Regina Benjamin, Richard M. Lerner and Martha Murphy.

“These three new board members embody the values of Tulane University,” President Michael A. Fitts said. “Each, through their own fields and in their own ways, have made profound impacts on our government and society, as well as on the mission of Tulane itself. Their membership on our Board will undoubtedly better us as an institution and as individual leaders.”

“Each, through their own fields and in their own ways, have made profound impacts on our government and society, as well as on the mission of Tulane itself.”

Benjamin earned her MBA from Tulane’s A. B. Freeman School of Business in 1991. She received an honorary degree of Doctor of Science at Tulane’s 2010 Unified Commencement and was awarded the University Distinguished Alumnus/na Award in 2012. Benjamin earned her bachelor’s degree from Xavier University of Louisiana, attended the Morehouse School of Medicine and received her MD degree from the University of Alabama at Birmingham. Benjamin completed her residency in family medicine at Mercer University’s Medical Center of Central Georgia.

“When I opened my solo practice in the underserved community of Bayou La Batre, Alabama, I wanted to find a way to deliver affordable and quality healthcare to everyone, especially those who worked but could not afford health insurance. Tulane’s A.B. Freeman School of Business gave me the tools and methods of thinking that allowed me to combine medicine and business to seek solutions on local, national and international levels. I am so pleased to join the board, and to have the opportunity to help guide Tulane through our nation’s next few challenging years,” Benjamin said.

Richard Lerner is a retired banker, having served as chairman and chief executive officer of Annapolis Bancorp, Inc. and its subsidiary bank, BankAnnapolis, until the bank was acquired by F.N.B. Corporation (FNB) in 2013. He then served as chairman of the Maryland Region of First National Bank of Pennsylvania, FNB’s principal subsidiary.

Lerner received his bachelor’s degree in political science from Tulane’s College of Arts & Sciences in 1981 and his MBA in finance from the School of Business in 1983. He has been a member of the President’s Council since 2012 and was recently inducted into the Paul Tulane Society.

In honor of his late father, Lerner has endowed the Lawrence E. Lerner Presidential Chair in Aging at Tulane, devoted to increasing scientific understanding of gerontology and longevity and advancing research that leads to healthier, happier and more productive lifespans.

Lerner credits Tulane leaders for much of his success.

“Former presidents Hackney and Kelly stand out in my mind, along with other supportive faculty and staff, as leaders whose guidance, encouragement and faith in me profoundly influenced my life. As a newly elected board member, I’ve been given an ideal opportunity to return the favor and pay it forward,” Lerner said.

He added that he is “deeply honored to join this esteemed group of Tulane leaders” and help build Tulane into a world-class academic and research institution.

“As President Fitts so eloquently says, Tulane is committed to ‘teaching the love of knowledge for its own sake and how to use that knowledge to tackle the pressing issues of our time.’ I can’t think of a worthier cause and will take great pride in doing everything I can to nurture and support it as a member of the Tulane board,” Lerner said.

Martha Murphy, who received her bachelor’s degree from the University of California in 1976, has managed an investment partnership specializing in commodities since 1982.

Murphy comes from a long line of Tulane supporters and has served as the chair of the Tulane-Murphy Foundation for 25 years. The Foundation supports the Murphy Institute in Political Economy, which fosters a variety of academic programs in the fields of political economy, ethics and public policy across a broad curricular spectrum at Tulane.

“Tulane is one of the reigning educational institutions in America, and my family has happily supported it for many, many decades. I'm happy to continue that tradition. I am always impressed and deeply grateful for the contribution Tulane makes to education, not just in New Orleans and the state of Louisiana, but both regionally and nationally. I am pleased to join the board and become a more fulsome player for the university,” Murphy said.