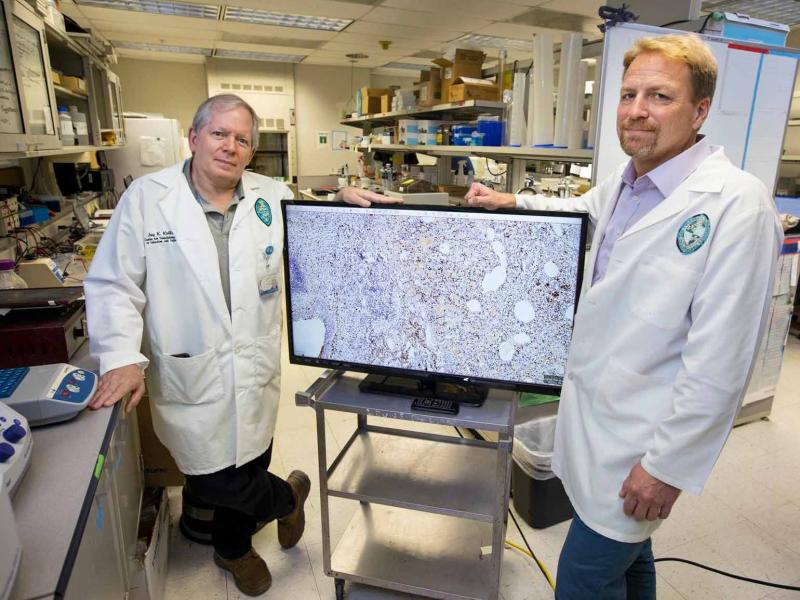 Dr. Jay Kolls and Derek Pociask, PhD, in front of a scanned image of a 50-year-old lung tissue slide that was key to solving a medical mystery. Photo by Rusty Costanza.

When scientists were developing a vaccine against COVID-19, a key worry was the potential to cause disease enhancement. It’s a complication that occurs when a vaccine does the opposite of what it’s intended to do and instead makes someone more vulnerable when exposed to a pathogen.

For COVID-19, the fear can be traced back to an infamous clinical trial in the 1960s for an experimental vaccine against respiratory syncytial virus (RSV), the most common cause of pneumonia in children. The vaccine used an inactivated form of the virus, but almost 80 percent of the children who were vaccinated and later exposed to the real virus were hospitalized for severe illness. Two toddlers died. The boys’ deaths stopped RSV vaccine development for decades — and was one reason scientists pursued the novel MRNA vaccine design against COVID-19 instead of using an inactivated form of the respiratory virus.

The cause of these toddlers’ deaths was a medical mystery for decades — until now, according to a new study co-authored by Tulane University researchers in the journal Science Translational Medicine.

Scientists from Tulane University School of Medicine were able to delicately peel back the layers of 50-year-old medical slides containing lung tissue samples from the children to perform a detailed analysis of gene expression and study their immune response. Researchers compared the results to a control group using a similar analysis of more recent tissue slides from age and race-matched children who died from non-pulmonary causes.

“These two children died likely due to injury to surfactant producing cells in the lung that are critical for transporting oxygen to the blood,” Kolls said.  “Our study provides a comprehensive characterization of fatal enhanced respiratory disease, a tragedy that hampered RSV vaccine development for decades.”

Kolls worked with co-corresponding author Fernando P. Polack of Vanderbilt University and Fundación INFANT in Argentina and an international research team on the project. Derek Pociask, assistant professor of medicine at Tulane, devised the method for extracting material from the archived medical slides. It was no easy task considering the slides were only a centimeter wide and just six microns thick.

“It took us four months of optimizing to get the method for getting RNA off of an old slide that had been cover-slipped,” Pociask said. “In this case, the only thing we had left from these kids were these slides from the 1960s. So, we practiced as much as we could.”

The results of the study could make future attempts at developing an RSV vaccine safer by providing a molecular signature of enhanced RSV disease. Future vaccine developers can look for these markers when they test promising candidates in preclinical models.

“They can look for the same gene signatures that we identified,” Kolls said. “If they can show that their vaccine doesn't elicit any of that kind of response, I think that would give both a potential funding sponsor or the FDA some comfort level that the vaccine is safe.”