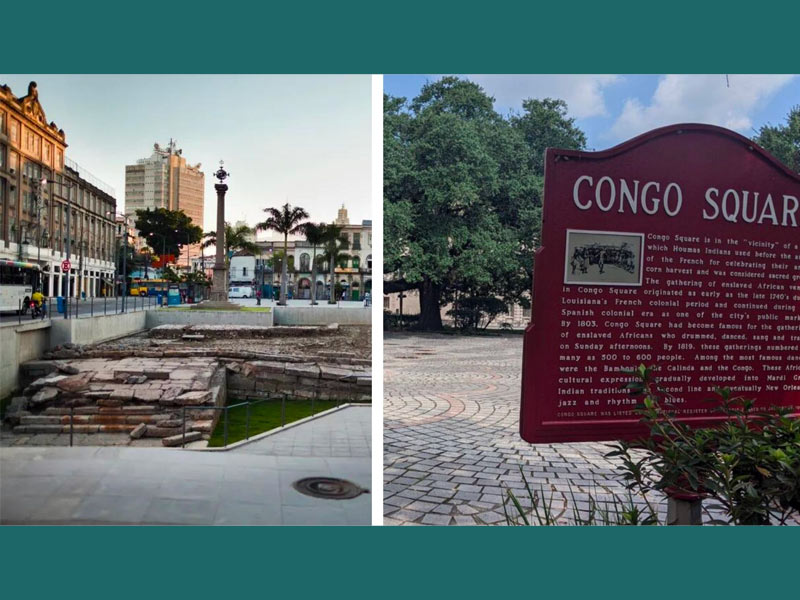 The Sawyer Seminar inaugural events explore urban displacement in Valongo Wharf in Rio de Janeiro (left) and sites of the Tremé such as Congo Square. Photos provided by the Sawyer Seminars.

Tulane has launched the Mellon Foundation-sponsored Sawyer Seminar, Sites of Memory: New Orleans and Place-based Histories in the Americas, which takes New Orleans as a key case study for a broader understanding of settler-colonial, formerly slavery-fueled economies in the Americas using the theme of site-based public history and memorialization. The seminar is co-organized by art history professors Adrian Anagnost and Mia L. Bagneris. Its inaugural programs begin Dec. 7.

Sites of Memory, supported by a grant from The Andrew W. Mellon Foundation, is a year-long site-specific inquiry that engages scholars, artists and activists in exploring changing historical narratives in New Orleans and the greater Gulf South region. Combining scholarship and public history — and embracing “site” as the pedagogical center — the seminar examines accretions of myth and memory at contested sites of public history such as heritage sites; plantations and historic houses; monuments and memorials; “historic” districts; and site-specific artworks.

The first in a series of multi-part programs in the seminar, Sites of Memory: New Orleans and Rio de Janeiro: Exploring urban displacement in Tremé and Valongo Wharf, includes a film screening, lecture and site visit of the Tremé, all highlighting community activism in New Orleans and Rio de Janeiro as ways to challenge disinvestment in Afro-descendant neighborhoods and raising questions about the tendency for these places to be subordinated to outward-facing urban “renewal.”

On Tuesday, Dec. 7, at 6 p.m. in Stone Auditorium, Tulane students, staff, faculty and members of the community are invited to participate in a free screening of an excerpt from a documentary about Rio de Janeiro neighborhood Vila Autódromo and the documentary Faubourg Tremé: The Untold Story of Black New Orleans, with an introduction by Pamela Sertzen. The film, created by two native New Orleanians — writer Lolis Eric Elie and filmmaker Dawn Logsdon — documents the rich, living culture of Faubourg Tremé, considered the oldest Black neighborhood in America, the origin of the southern civil rights movement and the birthplace of jazz.

The second event in the series will take place on Friday, Dec. 10, from 3:30 - 5:30 p.m. in the Diboll Gallery in Newcomb Commons. It will kick off with a demonstration by Luther Grey and Congo Square drummers, followed by a panel discussion with Lorraine Leu, who is a jointly appointed professor in the Department of Spanish & Portuguese and the Lozano Long Institute for Latin American Studies (LLILAS) and affiliate of the John L. Warfield Center for African & African American Studies at The University of Texas at Austin. Leu will be joined on the panel by Sara Zewde, assistant professor of practice at Harvard University’s Graduate School of Design and Freddi Williams Evans, author of Congo Square: African Roots in New Orleans. The panel will be moderated by Adrian Anagnost. The event is free and open for all to attend.

On Sunday, Dec. 12, beginning at 1 p.m., the concluding program of the series exploring New Orleans and Rio de Janeiro will take place in the Tremé. Limited to 30 guests, this event has already been filled; if interested in adding yourself to the wait list, RSVP to ctucker@tulane.edu. This experiential visit led by staff of the New Orleans African American Museum will feature significant sites in the Tremé, ending with a meal, conversation and performances at Congo Square.

Additional events in the Sawyer Seminar, exploring a variety of sites and themes will continue to take place in 2022. More information can be found at the website sitesofmemorynola.org.