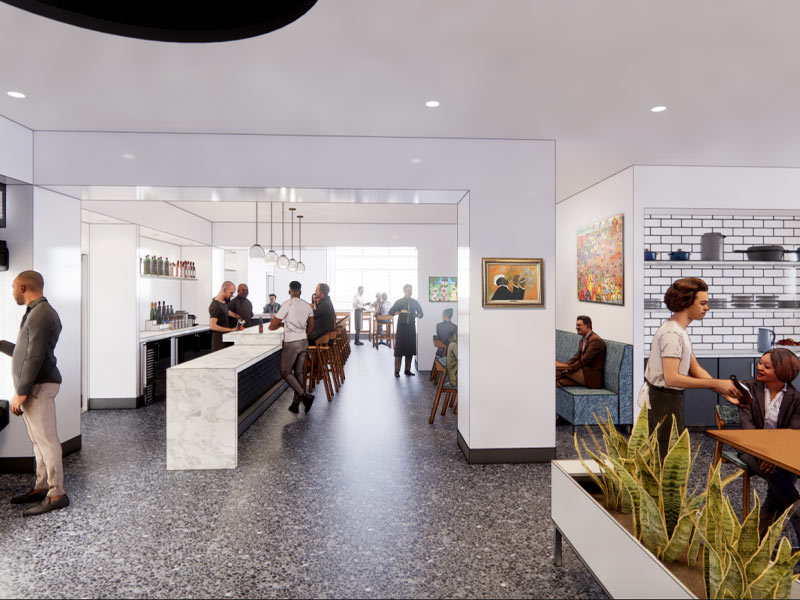 Opening in the spring of 2022, the yet-to-be-named restaurant will offer breakfast and lunch, as well as coffee and grab-and-go items for both tenants of the building and members of the community.

As Tulane University prepares to open the Thirteen15 apartment building in the former Warwick Hotel, a deal has been inked to showcase another uniquely New Orleans treasure, the newest restaurant helmed by Dook Chase of the Chase family. A restaurant space has long been planned for the building, and this fall, Tulane signed a lease with Edgar “Dook” Chase IV, grandson of Leah and Dooky Chase.

Opening in the spring of 2022, the yet-to-be-named restaurant will offer breakfast and lunch, as well as coffee and grab-and-go items for both tenants of the building and members of the community. Weekend brunch will feature classic New Orleans favorites and live music.

“This will be my take on New Orleans cuisine,” Chase said, but added that it will still bear influences from his legendary grandparents.

Leah Chase was passionate about collecting and sharing art from Black artists, a passion that her grandson shares.

“We aren’t just about food and hospitality,” Chase said. “We are also focused on lifting up the arts community.” Chase will collaborate with Stella Jones Gallery, a longtime friend and partner of Leah’s, to decorate the space.

Thirteen15 is located at 1315 Gravier St. and features 154 fully furnished units in walking distance of Tulane’s downtown campus. The front entrance faces Duncan Plaza, a public park managed by the Downtown Development District that may see its own redevelopment soon. While the property will be managed as a market-rate apartment rather than a traditional university residence hall, the project is designed for the Tulane community, including students, employees and alumni.

Thirteen15 is one step in the university’s long-term plans of revitalization in downtown New Orleans.

“We are proud that Tulane will have such a vital role in the rebuilding of this area,“ Tulane Chief Operating Officer Patrick Norton said. “In renovating the Warwick Hotel, in our partnership with Dook, and in our planned work at Charity Hospital, we are committed to playing a part in the future of New Orleans as we pay respect to the legacy of the past.”

Just as Dooky Chase’s Restaurant offered hope and healing for the city during the civil rights movement and following Hurricane Katrina, Chase hopes that his new restaurant will strengthen the resilience of New Orleanians as the city continues to recover from the COVID-19 pandemic and Hurricane Ida.

“The Warwick is one of many beautiful buildings in the heart of New Orleans that deserves to be restored as we continue to get New Orleans back to the city we want it to be,” Chase said.