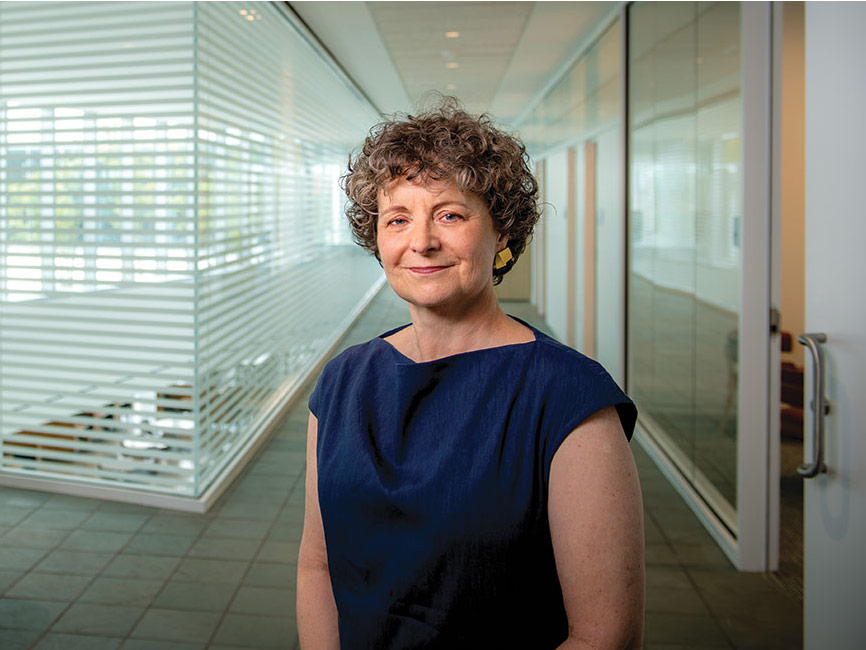 Newcomb Institute Executive Director Sally Kenney, pictured in the institute’s home in The Commons, has announced her plans to step down effective June 30, 2022. She will eventually join the faculty of the Department of Political Science. (Photo by Paula Burch-Celentano)

After 12 years at the helm of the Newcomb Institute at Tulane University, where she fostered the legacy of Newcomb College and educated tomorrow’s leaders to achieve gender equity, Executive Director Sally Kenney has announced her plans to step down effective June 30, 2022. After a year sabbatical, Kenney then plans to join the Tulane Department of Political Science as a full-time faculty member.

Kenney was the first permanent executive director of the institute, a role she assumed in January 2010. President Michael Fitts praised Kenney for her ability to honor and continue the historic mission of Newcomb College while also building for the future.

“By staying true to the proud legacy of Newcomb College, Sally has well positioned the Newcomb Institute to continue the crucial work of preparing students to succeed and to make the world a better place,” Fitts said. “We are grateful to her for years of service and many achievements.”

Robin Forman, senior vice president for academic affairs and provost, said Kenney’s leadership was central in establishing the institute as a thriving space that gives undergraduate students the skills to lead and achieve gender equity.

“Sally’s deep intelligence, scholarly expertise and passion for the work of gender equity are infused through every aspect of the Newcomb Institute. The result is that she has built an institute that has provided transformative experiences, inside and outside of the classroom, for thousands of Tulane students,” Forman said.

In a letter to the Newcomb Institute’s director’s advisory council announcing her plans, Kenney said advancing the legacy of Newcomb College, and keeping Newcomb traditions alive, such as Under the Oaks and Newcomb Senate, are among her proudest achievements.

Kenney’s tenure saw the rise of numerous Newcomb Institute programs that gave students real-world feminist educational opportunities. These include Newcomb’s study abroad program, through which students taught sex education in Kenya, and an effort that gave women in the Louisiana Correctional Institute for Women the opportunity to earn credit toward a Tulane degree. The Newcomb Institute also undertook efforts to combat sexual violence on campus.

In addition to her work as executive director, Kenney taught a third-year course in the Newcomb Scholars program, as well as courses on domestic violence, women’s imprisonment, leadership and rape. She was invited to the White House twice: to recognize her work on campus sexual violence and again to recognize her efforts to create a diverse and representative judiciary.

Kenney is also a professor of political science and an affiliated faculty member of Tulane Law School and the School of Public Health and Tropical Medicine. Her scholarship has focused on comparative employment discrimination, the European Court of Justice, feminist social movements and judicial selection, particularly women judges.

Under Kenney, the Newcomb Scholars program grew into a preeminent cohort experience, bringing together some of the top students across the university to study feminist leadership. Also, the Newcomb Institute helped create two residential learning communities, which bring together like-minded women to form connections with others with similar interests.

Kenney was also instrumental in the creation of a new unified home for the Newcomb Institute, leading the effort to ensure that it would remain at the center of campus life. She helped plan, design and fundraise for the institute’s new home, which is located on the third floor of The Commons. Rather than being in three separate buildings, none of which were designed for the function they were serving, the Newcomb Institute now occupies 19,000 square feet in the heart of the uptown campus, bringing staff and operations under one roof and better serving the needs of students.