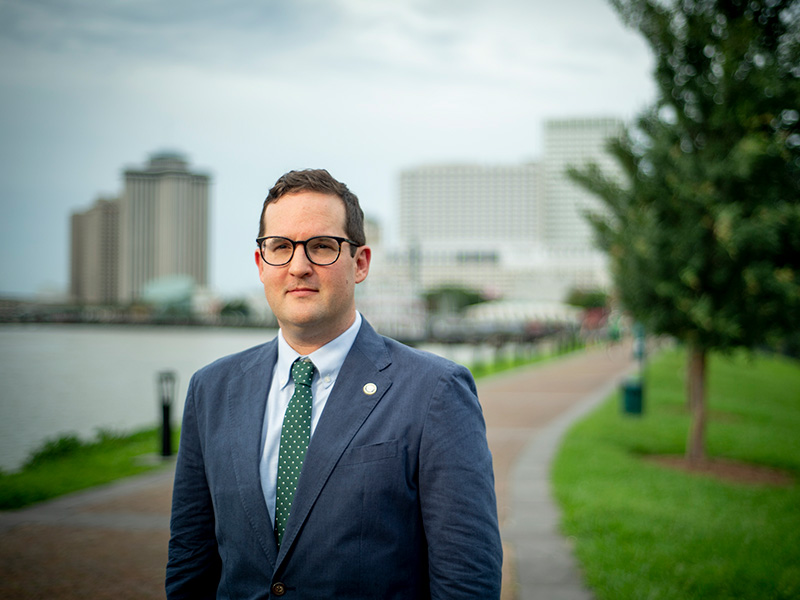 Jesse M. Keenan, a professor in the Tulane School of Architecture, is among dozens of international experts involved in the writing and editing of a new U.N. report on the state of climate change. (Photo by Paula Burch-Celentano)

Jesse M. Keenan, an associate professor in the Tulane University School of Architecture, is among dozens of scholars and scientists who spent the past four years writing and editing a newly released United Nations’ report on the state of climate change.

The IPCC (Intergovernmental Panel on Climate Change) Sixth Assessment Report: Mitigation of Climate Change provides an updated global assessment of global emissions pathways and corresponding progress to curb those emissions. It explains developments in emission reduction and mitigation efforts, as well as the impacts of national climate pledges in relation to long-term emissions goals.

Keenan served as editor of the chapter on buildings, which focuses on how buildings can be designed, constructed, managed, operated and used in a manner than reduces greenhouse gases and promotes environmental and social sustainability.

“The report highlights the critical role that architects, developers and planners play in both reducing emissions and advancing social and environmental sustainability.”

“It took us years to complete this work in dialogue with national governments and thousands of global experts and stakeholders,” said Keenan, who was nominated by the U.S. State Department and appointed by the United Nations to serve as an editor. “The chapter looks at both high and low technologies within the context of active and passive designs applied to the various geographic regions of the world.”

The gist of the report, which covers everything from buildings and transport to agriculture and industry, is that nations need to move much quicker in reducing fossil fuel emissions. If not, the goal of limiting global warming to 1.5°C, or 2.7 F, will likely not be reached by 2050, as called for in the Paris Agreement, an linternational treaty on climate change.

“The report highlights the critical role that architects, developers and planners play in both reducing emissions and advancing social and environmental sustainability,” Keenan said.

“Buildings are designed and built very differently around the world, as a reflection of unique environments, resources and cultures. Our work highlights this diversity and acknowledges the many forms of knowledge that are necessary to advance environmental sustainability.”

Buildings account for 21% of greenhouse gas emissions, Keenan said. They include direct emissions, such as heating and cooling systems; indirect emissions, which occur off-site and are related to heat and electricity production; and embodied emissions from the production, transportation and installation of construction materials used in buildings.

“We have the tools, materials, designs and technologies to advance social and environmental sustainability,” Keenan said. “As consumers of buildings, we all play a critical role in reducing greenhouse gases—in everything from using less space to investing in energy efficiency in our homes. But, as educators, we have an opportunity to translate this knowledge to guide the next generation of designers and developers to construct a more sustainable and equitable built environment.”

For more information on the conclusions from the IPCC report, see Keenan’s video commentary for the American Association for the Advancement of Science (AAAS).