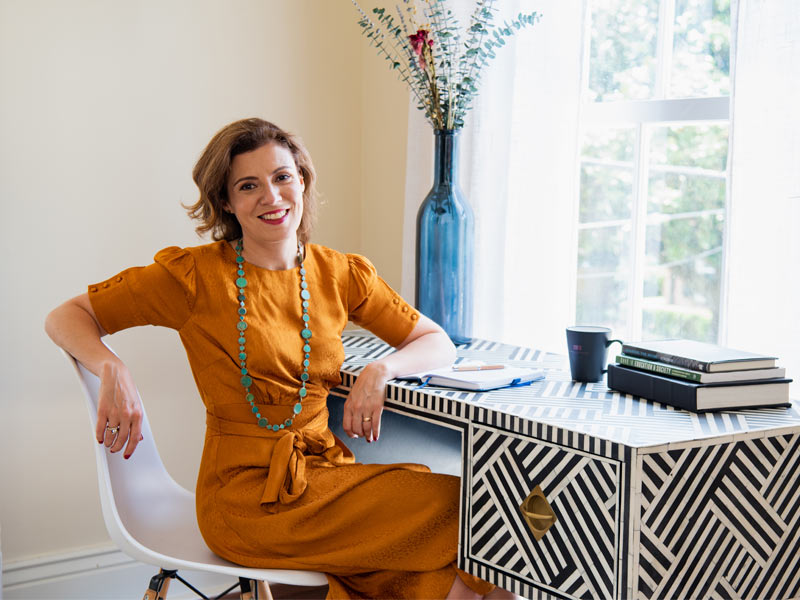 Ilana Horwitz is an assistant professor in the Tulane Department of Jewish Studies and the Fields-Rayant Chair in Contemporary Jewish Life.

Girls raised by Jewish parents are 23 percentage points more likely to graduate college than girls with a non-Jewish upbringing, even after accounting for their parents’ socioeconomic status. Girls raised by Jewish parents also graduate from more selective colleges, according to a newly published study by Tulane University professor Ilana Horwitz.

But the explanation is not simply that Jews value education.

Horwitz and researchers from Cornell and Stanford universities followed 3,238 adolescents for 13 years to conclude that girls raised by at least one Jewish parent acquire a particular way of viewing the world that influences their education choices, career aspirations and various other experiences.

“Girls raised by Jewish parents articulate a self-concept marked by ambitious career goals and an eagerness to have new experiences.”

“Girls raised by Jewish parents articulate a self-concept marked by ambitious career goals and an eagerness to have new experiences,” said Horwitz, an assistant professor in the Tulane School of Liberal Arts' Department of Jewish Studies and the Fields-Rayant Chair in Contemporary Jewish Life. “For these girls, elite higher education and graduate school are central to attaining self-concept congruence.

“In contrast, girls raised by non-Jewish parents tend to prioritize motherhood and have humbler employment aims. For them, graduating from college, regardless of its prestige, is sufficient for self-concept congruence.”

Horwitz and her colleagues came to their conclusions based on survey data from the National Study of Youth and Religion and the National Student Clearinghouse. Among the findings: girls raised by Jewish parents fared better than boys raised by Jewish parents, a trend that is opposite of what happens to conservative Protestant women where boys fared better.

In the study, Horwitz debunks the myth that Jews, like Asian Americans, are predisposed to educational success because of their ethno-racial background. Framing Jews’ achievement as a cultural trait erroneously spreads the belief that educational success comes from adopting the “right” cultural values. But Horwitz argues that Jews value education because “it has worked for them throughout history, not because they are genetically or culturally predisposed to it.”

Religious subcultures, she said, are not just shaped by theology but by such factors as historical events, demographic patterns and political concerns. For centuries, the daily life of Jewish people, regardless of social class, occupation or age, was organized around reading and studying Torah. As a result, Jews became literate much earlier than  other people.

That focus on schooling continued through the ages, with education woven into the fabric of contemporary Jewish life. As Eastern European Jews immigrated to the United States in the early 20th century, formal schooling became increasingly important for occupational success. Education played such a significant role in helping Jews survive in Europe and in the United States that it now permeates Jewish religious subculture.

The gender-egalitarian nature of Judaism, especially non-Orthodox Judaism, also matters. Girls raised by Jewish parents have distinctive gender self-concepts that stem from Jews’ strong levels of support for gender egalitarianism. Jewish parents sent messages to their sons and their daughters that they can aspire to professional careers, Horwitz said.

“They developed a self-concept marked by openness to new experiences and a vision of themselves as prominent careerwomen,” Horwitz said. “They were highly attuned to what these careers take and organized their educational experiences to position themselves for elite colleges so they could realize their professional visions and attain self-concept congruence.”

In addition to Horwitz, the study’s other authors are Kaylee Matheny and Krystal Laryea of the Graduate School of Education at Stanford University, and Landon Schnabel, a gender scholar at Cornell University.

“One of the biggest stories in higher education is the gender gap in education and the reversal that's occurred with women now more likely than men to go to college,” Schnabel said. “The gender and education story is incomplete without thinking about religion because religion and gender are so intertwined.”

This is the first study to show that the level of embeddedness in and exposure to a religious subculture through parents matters for educational outcomes.