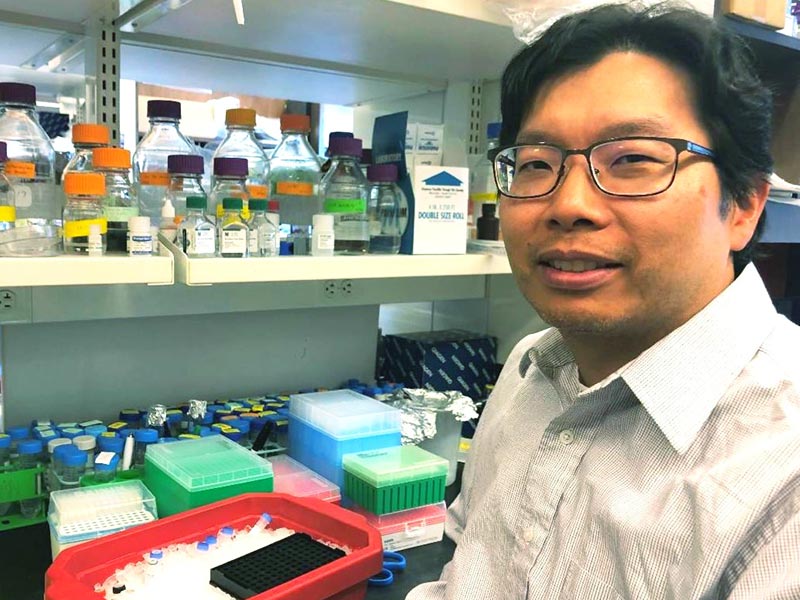 Dr. Jeffrey Han and his team aim to better understand how DNA damage caused by the transposon L1 causes infertility in a mouse model. A better understanding of the biology of L1 could also help researchers make connections to other diseases associated with transposon activity, including cancer.

Transposons – also known as “jumping genes” – are pieces of movable DNA that can jump around in the genome. Through a cut-and-paste or copy-and-paste mechanism, they can move copies of themselves to a different chromosome or to a different area of the same chromosome. This process – called transposition – can result in mutations and DNA damage.

Long Interspersed Nuclear Element-1 (LINE-1 or L1) is a family of transposons that continually mutate the mammalian genome through this “jumping” activity. Their unchecked expression is associated with various abnormal states, such as cancer, infertility, aging and neurologic diseases.

Scientists do not yet know whether they play a role in causing these disorders, partly because our knowledge of L1 biology in vivo is rudimentary. To better understand L1 and its possible role in infertility, Dr. Jeffrey Han, associate professor of biochemistry and molecular biology and Tulane Cancer Center program member, was recently awarded a five-year, $2 million National Institute of General Medical Sciences (NIGMS) grant to investigate transposon activity in a mouse model.

“It’s been shown that in the male mouse germline, when you have certain mutations – and these can occur in humans too – transposons are basically unrepressed,” said Han. “”They go wild and the mice are sterile; they can’t reproduce because their germ cells arrest in meiosis. We're interested in what part transposons play in that process and how.”

It is difficult to “”knock out” or turn off these genes to see the effects because there are simply too many copies. Instead, Han and his team plan to knock out a cellular pathway – the endosomal sorting complex or ESCRT – they previously found to be important for LINE-1 transposition. “We can knock it out and in theory suppress transposition and then determine whether these mice can bypass the meiotic arrest and potentially become fertile again.”

A possible long-term outcome of this research is to identify transposon activity as a druggable target for some subset of human infertility. If we can find drugs to block the DNA damaging activity of the transposons, we can subsequently block their ability to mutate the DNA. So far, according to Han, there hasn’t been a lot of interest from pharmaceutical companies in this area, but as more evidence is gathered, he feels there could be a potential interest in developing these types of drugs.

Although the work supported by this grant involves infertility, a better understanding of the biology of L1 could help researchers make connections to other diseases associated with transposon activity, including cancer. “Certainly L1 is turned on in many human cancers,” said Han. “I think understanding how these particles traffic around the cell could be relevant and is something you could potentially target in cancer treatment as well.”

“Many people wonder why these elements even exist, why there are so many of them,” said Han. “They must be doing something wonderful for us since there are so many copies in our genome. The likely answer is no. They’re just parasites that have been in our genome for hundreds of millions of years, and their goal is to make more copies of themselves so they will continue to survive. As long as they can replicate faster than we’re getting rid of them, they will be here.”