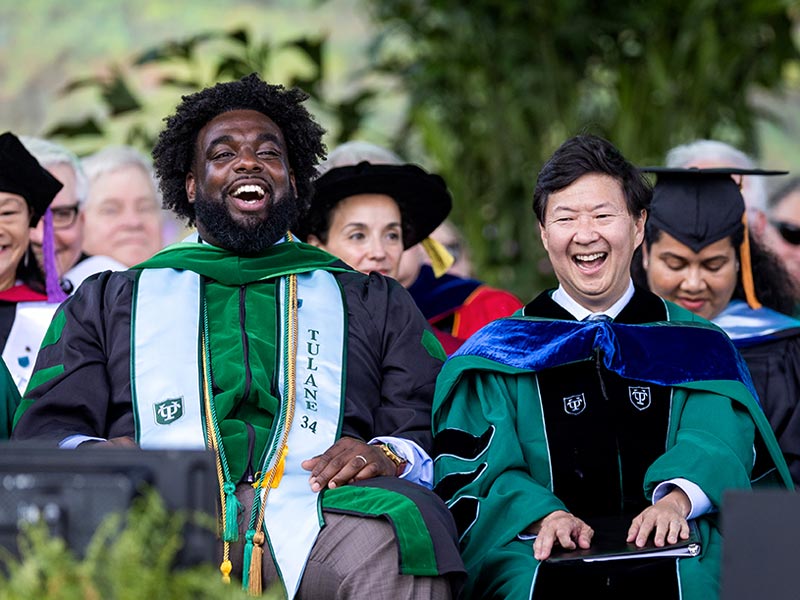 At the Unified Commencement Ceremony on May 21, Class of 2022 student speaker Dr. Russell J. Ledet and keynote speaker Ken Jeong were on hand to address the degree candidates with their inspiring speeches. (Photo by Rusty Costanza)

The Class of 2022 celebrated its Unified Commencement ceremony in true Tulane and New Orleans style on Saturday, May 21 — with music and laughter mixed with serious recognition of the determination and grit that it took to get to this day.

In the academic procession, graduates marched onto Benson Field, where they sat in chairs while their friends and families watched from the Yulman Stadium stands. The sun peeked in and out from behind clouds.

Dr. Michael White and his Original Liberty Jazz Band provided the musical prologue and invocation, setting the tone for the festivities.

Tulane President Michael A. Fitts said, “Music is everywhere in New Orleans. Once you hear that New Orleans beat, once you move to its rhythm, you never get it out of your head.”

Like a practiced DJ, Fitts shared advice and presented samples of iconic musical beats from “Iko, Iko,” “Funky Drummer” and “We Will Rock You,” extolling the strength of the Class of 2022.

“There is so much that could have beaten you down: COVID-19, hurricanes, and a world in conflict and chaos. But you have not been diminished by your circumstances. You have persisted fearlessly with creativity and confidence. You have kept the beat.”

Ken Jeong, the keynote speaker, reiterated the importance of never giving up. “The key to success is persistence,” said Jeong, an actor, producer, writer — and doctor. Known for his roles in The Hangover movie franchise, the TV shows “Community” and “Dr. Ken” along with other performances, Jeong got his big break in comedy while performing in small clubs in New Orleans when doing medical research in gastroenterology at Tulane medical school.

“New Orleans magically opened a new life for me,” said Jeong, noting that the city undoubtedly also did that for members of the Class of 2022. “I discovered the wonder and joy that is this city.

“It’s because of New Orleans I was able to persist and become both a doctor and a comedian.”

But Jeong’s success was not a given. In New Orleans, he discovered his fully integrated sense of self — and he persisted. “Never give up,” Jeong told the graduates, even when experiencing failure and setbacks. “Never close the door on your life, always persist.”

The Class of 2022 student speaker, Dr. Russell J. Ledet, who received MD and MBA degrees at the ceremony, encouraged his fellow graduates to be proud of themselves at the moment of their graduation. “You earned this moment,” he said.

His time at Tulane taught Ledet that “family is everything, without debate.”

“There are people at this institution that will be connected to me for the rest of my life. They taught me how to appreciate hard work, persistence, belief in self, patience and most importantly, moments. Moments matter.”

President Fitts concurred that the Class of 2022 is being sent forth at a critical moment in history. “There has never been a class like yours,” he said. “You’re committed to community. You’re connected to each other in ways that outlast time and distance. You are smart problem-solvers at a time when people are seeking answers. You are leaders and barrier breakers, collaborators and beat makers. I can’t wait to see what you do next.”

At the ceremony, for the first time Tulane bestowed an honorary degree posthumously. It was presented to baseball legend Hank Aaron, whose widow, Billye Aaron, accepted it on his behalf. Ken Jeong also was presented an honorary degree along with Gen. David Berger, a 1981 Tulane graduate, who has been commandant of the U.S. Marine Corps since 2019. Dr. Rosalind Picard, an inventor, engineer, scientist and pioneer in artificial intelligence was also given an honorary award but was unable to travel to Commencement due to illness. She will receive her honorary degree at a later date. 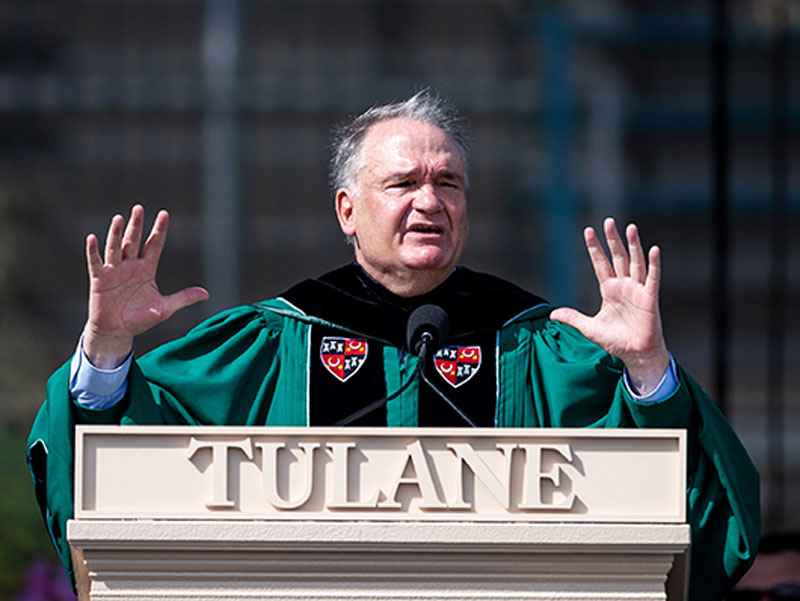