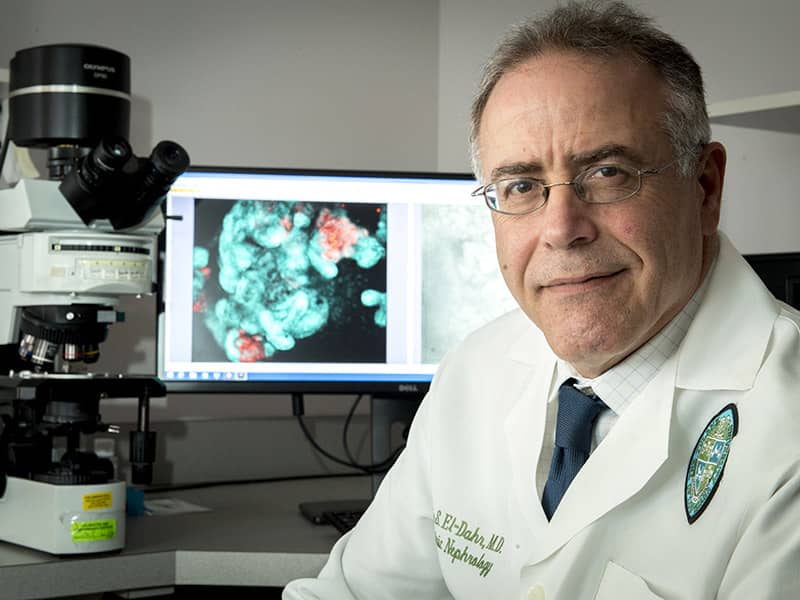 Dr. Samir El-Dahr is a professor and chair in the Department of Pediatrics at Tulane University School of Medicine. (Photo by Paula Burch-Celentano)

Tulane University researchers discovered a new mechanism that may explain why human kidneys, which are comprised of almost a million filter units, stop creating new filter cells after birth.

The findings were published in the Journal of the American Society of Nephrology.

Understanding this process could help scientists design new therapies to treat children with chronic kidney disease who were born prematurely with underdeveloped organs. Birth defects and hereditary diseases are the leading causes of kidney failure for children under 5 years old.

The research team, led by Dr. Samir El-Dahr, professor and chair in the Department of Pediatrics at Tulane University School of Medicine, used a mouse model to characterize what happens when a fetal stem cell differentiates into a mature kidney cell. If scientists can understand this at a genetic level, they may be able to reprogram other stem cells to do the same to discover a way to repair — or completely regrow — a damaged kidney.

“We all have a finite number of filters in our kidneys and premature babies stop making these filters after birth, which is why they end up developing chronic kidney disease,” El-Dahr said. “What we wanted to figure out is what stops premature babies from making new filters, which would move us closer to developing therapeutics that allow us to rejuvenate old cells and make them younger, which could possibly help premature babies to continue making kidney cells for at least one week after birth.”

To conduct the study, El-Dahr and his team isolated kidney stem cells from mice and simultaneously characterized the makeup and DNA blueprint that regulate gene function into those same cells. Researchers analyzed which portions of the DNA and individual genes were active during the process and which were not. This is the first time that this single cell technique has been applied to study kidney cell development.

To their surprise, the researchers found that near the time of birth, the blueprint that controls the fate of kidney stem cells change dramatically, making the cells believe they are ready to sustain kidney function instead of renewing themselves.

Researchers plan to explore using CRISPR and other technologies to manipulate portions of the DNA to try to rejuvenate progenitors into a more self-renewing state, El-Dahr said.