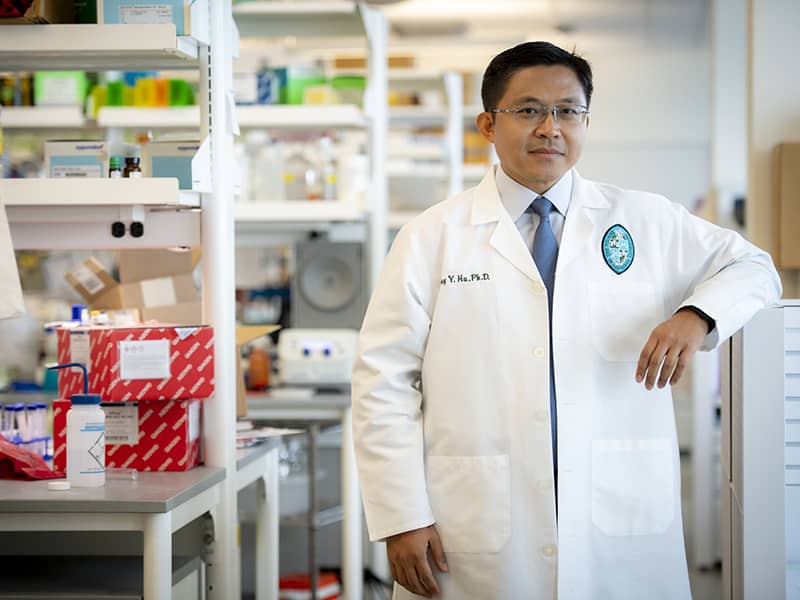 Dr. Tony Hu is the Weatherhead Presidential Chair in Biotechnology Innovation and a Professor in Biochemistry and Molecular Biology, Biomedical Engineering, and Microbiology at Tulane University. (Photo by Paula Burch-Celentano)

Researchers at Tulane University School of Medicine have developed a new highly sensitive blood test for tuberculosis (TB) that screens for DNA fragments of the Mycobacterium tuberculosis bacteria that causes the deadly disease.

The test could give doctors a new tool to both quickly identify TB and then gauge whether drug treatments are effective by monitoring levels of DNA from the pathogen circulating through the bloodstream, according to a new study published in the journal The Lancet Microbe.

Tuberculosis is now the second most deadly infectious disease in the world, behind only COVID-19. In 2020, an estimated 10 million people contracted TB and 1.5 million people died from it, according to the World Health Organization.

Most TB tests rely on screening sputum, a thick type of mucus from the lungs. But collecting sputum from patients suspected of having TB can be difficult, especially for children. TB can also be harder to diagnose in immunocompromised HIV patients and others where the infection migrates outside of the lungs into other areas of the body. In these extrapulmonary cases, patients can have little bacteria in the sputum, which leads to false negatives using current testing methods, said lead study author Tony Hu, PhD, Weatherhead Presidential Chair in Biotechnology Innovation at Tulane University.

“This assay may be a game-changer for TB diagnoses that not only provides accurate diagnosis results but also has the potential to predict disease progression and monitor treatment,” Hu said. “This will help doctors rapidly intervene in treatment and reduce the risk of death, especially for children living with HIV.”

The study evaluated a CRISPR-based assay that screened for cell-free DNA from live Mycobacterium tuberculosis bacilli. The screening target is released into the bloodstream and cleared quite rapidly, providing a real-time snapshot of active infection.

Researchers tested preserved blood samples from 73 adults and children with presumptive TB and their asymptomatic household contacts in Eswatini, Africa.

Researchers also tested 153 blood samples from a cohort of hospitalized children in Kenya. These were HIV-positive patients who were at high risk for TB and presented with at least one symptom of the disease. The new test picked up all 13 confirmed TB cases and almost 85% of unconfirmed cases, which were cases that were diagnosed due to clinical symptoms and not existing gold standard testing methods.

The CRISPR-based test uses a small blood sample and can deliver results within two hours.

“We are particularly excited that the level of Mycobacterium tuberculosis cell-free DNA in HIV-infected children began to decline within a month of treatment, and most of the children's blood was cleared of the bacteria DNA fragments after treatment, which means that CRISPR-TB has the potential to monitor treatment and will give physicians the ability to better treat worldwide TB infections,” Hu said.

The researchers have since adapted the assay to a rapid test platform that can deliver results in 30 minutes without any special equipment. Results would be viewable on a paper strip like a rapid COVID-19 test.

“A highly accurate, rapid blood test that could be used anywhere would benefit millions of people living in resource-limited areas with a high TB burden,” Hu said.

The full results of the paper are online here.