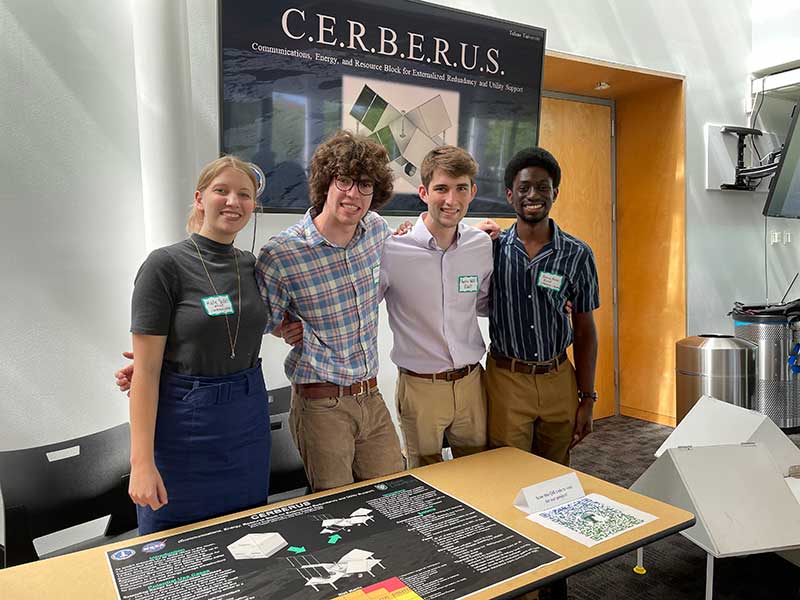 A team of Tulane University engineering graduates and students has been named one of 15 finalists in a NASA competition that seeks the most innovative ideas to improve the ability of astronauts to operate on the moon, Mars and beyond.

“We are especially proud that our small team of four held our own and showed we have what it takes to compete with other big-name engineering universities."

The Tulane team’s project is called CERBERUS (Communication, Energy and Resource Block for Externalized Redundancy and Utility Support). It is a mobile cube that “blooms” into a flower-like shape when deployed and is intended to provide communication capabilities, power generation, energy storage, and multi-purpose storage on the moon.

If named one of the top two winners, the team would present its work at another conference. If it garners enough interest, CERBERUS could be deployed as part of the Artemis mission to the moon, which is expected to launch in 2025.

All team presentations during the forum will be livestreamed and available to the general public here, with an archived version available for viewing following the event. The livestream begins June 21 at 7:40 CST, with Tulane presenting its project from 12:15 to 1 p.m.

“We are really excited that our work is getting recognized,” Scalet said. “We dedicated many hours to this project, and we felt that our submission showcased our hard work.”

Under the guidance of Matthew Barrios, a professor of practice in the Tulane Department of Physics and Engineering Physics, students began working on their idea during the fall semester of 2021. With four themes from which to choose, they decided to enter the portable utility pallet division and used a grant from Newcomb-Tulane College to purchase materials and create a model.

“We all came up with design concepts that addressed the prompt,” Scalet said. “We started to notice some themes and then synthesized these ideas into one design that integrated some of the best features of each idea.” They continued to refine the design until they were confident that they had a winning entry.

But until the finalists were named, Scalet said, she and her teammates were a bit worried about being overlooked. For one thing, Tulane does not have an aerospace engineering program.  Additionally, their team was significantly smaller than some of the other teams in the competition.

“We looked at some of the other selected finalists, and there were some serious powerhouse teams. Some teams had 30+ members, some were developing system prototypes, and many were studying aerospace engineering at universities dedicated to the subject.

“We are especially proud that our small team of four held our own, and showed we have what it takes to compete with other big-name engineering universities like MIT, UT- Austin and Virginia Tech,” Scalet said.

Team CERBERUS and the other 14 finalists were chosen by a steering committee of NASA personnel and aerospace industry experts based on originality and creativity in the areas of engineering and analysis, feasibility and technical merit and alignment with competition themes. Each team submitted a two-minute video and detailed proposal describing their concepts.

Since being named a finalist — which came with a $6,000 stipend — the team has prepared and submitted a technical report. They are now working on their poster and presentation to NASA and aerospace inustry leaders at the RASC-AL forum later this month. The top two teams at the forum will be awarded stipends to present their concepts at a major aerospace conference.

“These concepts are relevant to our goals to put the next humans on the Moon and establish the foundation to travel into deeper reaches of space,” said Pat Troutman, human exploration strategic analysist at NASA.  “This opportunity lets teams push their projects farther than they have in the past because it adds a level of real-life application to their engineering work and further advances technology readiness for NASA.”

CERBERUS is a mobile cube that “blooms” into a flower-like shape when deployed.