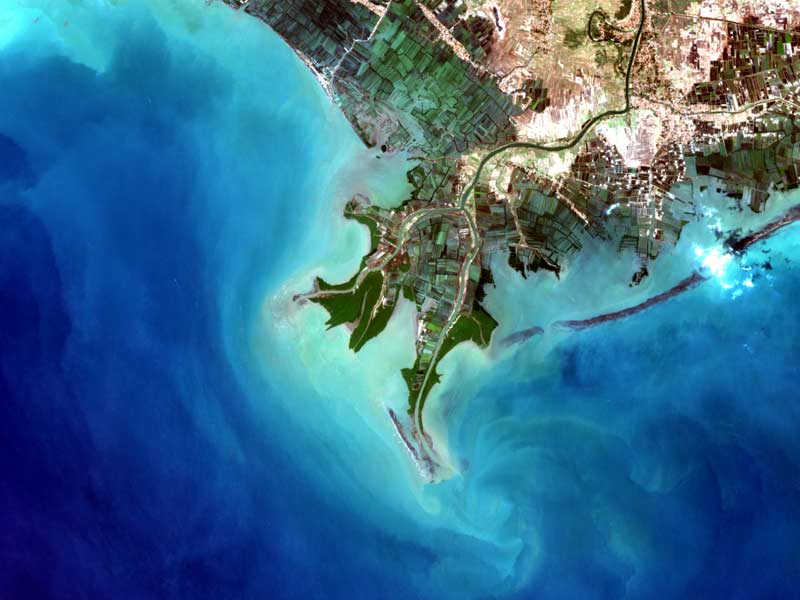 The photo above is a modified satellite image of avulsions on the Pemali Delta in Indonesia — one of the 113 examples in the team's database. (Brooke & Ganti, Modified European Space Agency/Copernicus Sentinel data)

Avulsions are natural but rare phenomena that occur when a river abruptly jumps course and forges a new river channel. Sometimes caused by large floods, avulsions can have devastating effects on communities while, at the same time, creating fertile deltas that have nurtured others.

To gain a better understanding of what controls avulsion location in the context of climate and land use changes, a team of scientists, including a Tulane University PhD candidate, has analyzed 50 years of satellite imagery and generated the first global database of river avulsions.

"Avulsions are catastrophic events that can potentially displace large populations and cause massive infrastructural damage."

Led by researchers at the University of California at Santa Barbara (UCSB), the study was published recently in the journal Science.  The study corroborates about 10 years of experimental work by the group, which called avulsions an “understudied curiosity.”

“This dataset provides the first unambiguous test of the theory, which demonstrates that there are three distinct regimes of avulsions on fans and deltas,” said co-author Vamsi Ganti, an assistant professor in the UCSB Department of Geography. “This is a long way from where we started. A decade ago, avulsions were thought to be these chaotic and stochastic events that were not very predictable.”

José Silvestre, a PhD candidate in the Tulane Department of Earth and Environmental Sciences, used satellite imagery to track how river paths have changed through time to identify river avulsions.

Locations of avulsions include some of the world’s largest waterways, including the Orinoco, Yellow, Nile and Mississippi rivers. A recent example occurred in 2008, when the Kosi River in India shifted its course by over 60 miles, displacing more than 3 million people.

“We leveraged a half-century of satellite observations and coupled these with theory and water and sediment discharge models to characterize avulsions on alluvial fans and deltas,” Silvestre said. “Our database revealed the existence of three distinct regimes of avulsions on fans and deltas, which allow a predictive framework to assess where rivers will shift course in response to land use and climate change.”

He said that while river avulsions are natural land-building processes that distribute sediment, water and nutrients on alluvial fans and deltas, “they are catastrophic events that can potentially displace large populations and cause massive infrastructural damage.”

Although interest in river avulsions has increased in recent years, research has been limited to laboratory experiments, numerical studies and limited field data, Silvestre said. Until now, there has been a lack of understanding as to where avulsions occur.

The team documented 113 avulsions across the globe and found that they were often tied to changes in channel slope or sedimentation just upstream of the river. In some cases, avulsions were farther upstream than expected and likely due to erosion.

Researchers are now looking at the global satellite record to develop new metrics for characterizing the factors that drive other types of river mobility, in addition to avulsions.

“The question that we’ve answered here is ‘where’ avulsions occur, but we haven’t really dug into ‘when,’” Ganti said, adding that both are equally important.